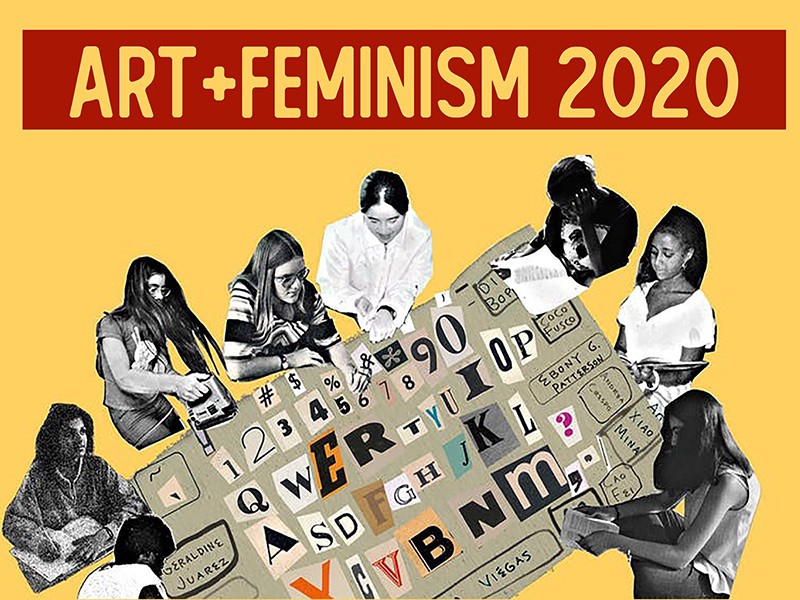 Newcomb Institute and Howard-Tilton Memorial Library are participating for the fifth year in a row with intersectional non-profit Art+Feminism’s efforts to directly address the information gap about gender, feminism, and the arts on the internet by hosting a training session and edit-a-thon to edit Wikipedia. (Artwork courtesy: Joanna Neborsky)

In a 2011 survey, the Wikimedia Foundation found that less than 10% of Wikipedia contributors identify as female and more recent research puts that number at 16% globally and 23% in the United States. There are significantly fewer biographical articles on women and non-binary people on Wikipedia, and computational linguistics studies revealed instances of gender bias among those that do exist.

As the 10th most visited website in the world and a popular source for encyclopedic information, Wikipedia is uniquely positioned to influence the way we interpret and process information. Gender bias and lack of representation on such a popular platform can promote stereotypes and omit the identities and lived experiences of specific groups.

“Lack of equal representation online only perpetuates hierarchical and patriarchal systems,” said Chloe Raub, head of Archives and Special Collections at Newcomb Institute. “If it becomes normal to see only certain types of people receiving attention online and in other forms of media, then ‘symbolic annihilation’ begins to take place — we begin to subconsciously accept that the limited stories we’re exposed to are the only ones worth telling.”

In an effort to make Wikipedia more gender inclusive, Newcomb Institute and Howard-Tilton Memorial Library are participating for the fifth year in a row with intersectional nonprofit Art+Feminism’s efforts to directly address the information gap about gender, feminism and the arts on the internet.

The campus partners will host an Art+Feminism training session and “edit-a-thon,” a DIY-style event where participants will work together to edit Wikipedia.

"The edit-a-thon gives the Tulane community an excellent opportunity not just to see how these information systems operate, but also do their part to make Wikipedia a more inclusive space and contribute to a more equitable representation of artists online," said Eli Boyne, rare book library associate for Tulane University Special Collections.

According to their website, Art+Feminism edit-a-thons are held year-round at museums, coffee shops, colleges, community centers and elsewhere. Since 2014, over 14,000 people at more than 1,100 events around the world have participated in edit-a-thons, resulting in the creation and improvement of more than 58,000 articles on Wikipedia to include cis and trans women, non-binary people, people of color and Indigenous communities.

Art+Feminism’s work is “centered on building an equitable global community striving to close the gaps in content and editorial representation on Wikipedia, ensuring that the histories of our lives and work are accessible and accurate.”