No Ifs, Ands or Butts

If you're a smoker, the Tulane Cancer Center has something special for you  the Freshstart Smoking Cessation Workshop. The reasons to attend a workshop are clear: Eight hours after a smoker quits, the carbon monoxide level in his blood drops to normal. After 24 hours, his chances of having a heart attack decrease. In two to three months, his circulation will improve and his lung function will increase 30 percent. 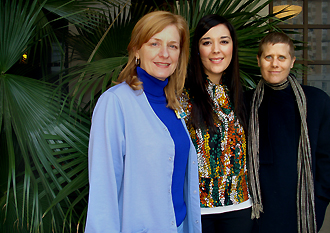 Working on the Freshstart workshops are, from left, Sara Bienvenu, nurse clinician with Tulane Medical Center, and Mary Kathryn Clabert, patient navigator and counselor in the Patricia Trost Friedler Cancer Counseling Center, both of whom are workshop facilitators, with Donna Vella, a participant. (Photo by Melanie Cross)

After a year without smoking, his risk of coronary heart disease will be half that of a smoker's, and if he can manage to stay smoke-free, his risk will be the same as that of a non-smoker's after 15 years.

The center has teamed up with the American Cancer Society to offer a series of four one-hour workshops that implement techniques that have been proven effective in helping smokers to kick the habit.

Donna Vella, a smoker for more than 20 years, heard about the Freshstart workshops while visiting her oncologist at the Tulane Cancer Center and decided to give quitting one more try. She made several unsuccessful attempts to quit, using everything from the “cold turkey” method to the nicotine patch. The workshop, however, is working for her.

“The group was small and more intimate than I thought it might be,” she says. “It was easy to talk and to listen to others in a group that size.” Through group discussion and other activities, including journaling, guided imagery and identifying the stressors that lead to nicotine cravings, she was able to make progress.

“What ultimately worked for me was that it became very personal. I got to the heart of why I started smoking in the first place,” adds Vella. She has been smoke-free for more than two months and plans to attend future Freshstart workshops to help her to stay that way.

Making these workshops more personal is the goal of facilitators Mary Kathryn Clabert, patient navigator and counselor at the Tulane Cancer Center, and Sara Bienvenu, nurse clinician at Tulane Medical Center. “We asked participants to pick a quit date  a new personal holiday for them that they could celebrate in future years  and to make the commitment to quit in the name of someone they love,” says Clabert. “We also had them write a goodbye letter to cigarettes in which they formally declare that cigarettes will no longer have control over them. They pledge to become healthier and to leave cigarettes behind.”

Bienvenu adds, "The four one-hour sessions are designed to equip participants with the tools and resolve needed to accomplish their goal. Together we discuss the pros and the cons of smoking and strategies to strengthen them and give them the fortitude to get past the nicotine and psychological addiction and become successful ex-smokers. The key to success is often intertwined with participants' desire to take control of their health and live a better life."

The next series of weekly Freshstart workshops begins Monday, Jan. 26, at the Tulane Cancer Center. Workshops are free and open to the public and will continue to be offered at Tulane throughout the year. To participate, e-mail Mary Kathryn Clabert or call 504-988-0844.

Melanie Cross is manager of communications for the Tulane Cancer Center.