Oil's recent climb to $100 per barrel shouldn't be all that surprising given the world's seemingly insatiable thirst for the commodity, says Eric Smith, a clinical professor in the A. B. Freeman School of Business. 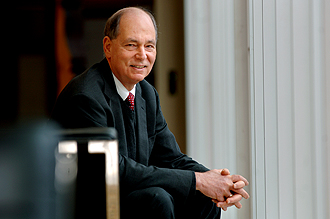 For every $10-per-barrel increase in the price of crude oil, the cost of gasoline goes up 20 cents a gallon, says Eric Smith of the Entergy-Tulane Energy Institute. (Photo by Paula Burch-Celentano)

Smith, who is associate director of the Entergy-Tulane Energy Institute, has long been telling his students to prepare for oil's price ascent as emerging economies in China and other parts of the world become greater consumers of the limited commodity.

Most of the easy-to-reach deposits of oil in the West have been tapped at a time when demand is increasing significantly, he says.

“We were predicting three years ago that oil would hit $100 (a barrel) under the same circumstances that have now arrived,” Smith says. “Supply is now short and demand has grown. China and India have now become major consumers of oil â¦ as well as have a number of the Middle Eastern countries.”

What does this mean for consumers? Expect to pay more at the pump. While oil futures retreated to around $97 per barrel late last week, Smith expects $100 oil to be a lasting trend. In fact, he wouldn't be surprised if oil costs rose by 20 percent this year. That would likely hit most consumers in the wallet.

“There is a good little rule of thumb that for every $10 increase in the aggregate price of crude, gasoline goes up 20 cents a gallon,” Smith says.

“The big concern is that historically we have seen a big run up in gasoline prices in the spring  anywhere from 50 cents to 75 cents a gallon,” says American Automobile Association spokesperson Don Redman. “We could be looking at $3.50 to $3.75 a gallon.”

Smith says that consumers have been resilient. Gas consumption accounts for approximately four percent of most household budgets and that's not enough to significantly alter behavior, he says. “People are notoriously resistant to change in their lifestyle and Americans are used to driving long distances in very big, heavy cars,” Smith says.

Redman says the consensus among analysts is that gasoline would have to reach $5 per gallon for consumers to significantly change driving habits to reduce consumption.

At least one group is getting a boost from the robust oil market: MBA students. More energy companies are seeking graduate students from the Freeman School's energy specialist program as well as from the Burkenroad Institute program, which follows energy service companies in the Gulf Coast region.

“It's not just because oil hit $100, it's because there has been much more demand and relatively anemic supply over the last several years in the energy sector,” Smith says.