What if you were a scholar who had only one remaining opportunity to publicly share your views? What caution would you throw to the wind? What would you consider so important that you would want to make it the capstone of your career? This is the scenario presented to faculty invited to present at the Last Lecture Series and one gleefully embraced by Bruce Fleury, instructor and lab supervisor in the ecology and evolutionary biology department. 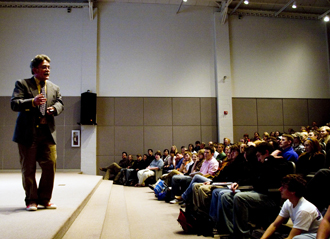 Bruce Fleury addresses a packed house in Freeman Auditorium for his Last Lecture on creationism and intelligent design. (Photos by Zack Smith)

The series is presented by Mortar Board, the Tulane chapter of the national senior honor society, as an annual recognition of outstanding faculty.

On Wednesday (Nov. 19) Fleury offered a talk titled “Creationism and Intelligent Design: Old Wine in New Bottles.” Fleury believes that creationism and intelligent design pose a significant threat to academic freedom, and he was not shy about saying so. He was enthusiastic and entertaining in making his point.

“Everyone has a hot-button issue,” Fleury said. “This one is mine.”

Fleury took the stage in Freeman Auditorium in front of a packed house; students sat in the aisles to hear him lay out his argument supporting evolution and discrediting creationism. Armed with a PowerPoint presentation peppered with movie clips and sound bites from popular shows such as “The Simpsons,” Fleury kept the audience entertained and enthralled while making his case.

Fleury began by tracing the roots of creationism back into classical antiquity, the days of Plato and Aristotle, when the philosophers chewed over the plan or direction of the universe. He followed the path of Christian fundamentalism on its crash course with Darwin's theory, until they ultimately collided in Dayton, Tenn., in July 1925 for the now famous “Scopes Monkey Trial.” 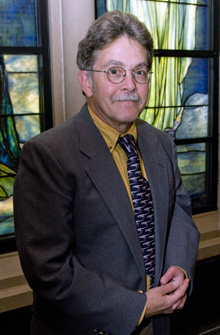 “Everyone has a hot-button issue; this one is mine,” says Fleury.

The trial, in which a challenge was made to a Tennessee law forbidding public school teachers to deny the literal Biblical account of humankind's origin, was dramatized first on stage then on the silver screen in Inherit the Wind. Fleury showed clips of the film to illustrate the watershed case and the argument that continues today.

It wasn't until the 1960s, however, that Darwin's ideas began to appear in science textbooks. When children started bringing these textbooks home, the relatively small creationist movement was quick to respond by creating a “climate of fear and mistrust” in schools, said Fleury.

Fleury also spoke of another landmark case, Edwards v. Aguillard, that stemmed from a Louisiana law requiring “creation science” be taught in public schools whenever evolution was taught.

The law was deemed unconstitutional and overturned, igniting the ire of it advocates and providing the “impetus for the intelligent design movement.”

Fleury attacked the movement to bring intelligent design into public school classrooms, calling it “dangerous” and warning that if it is successful it will serve to open the door to the teaching of religion in public schools.

While packaged differently, intelligent design is no different than the theologically based creationism of the early 20th century, he said.

“Intelligent design is not a new idea," Fleury said. “It is simply old wine in new bottles.”