Original painting is a treasure on campus 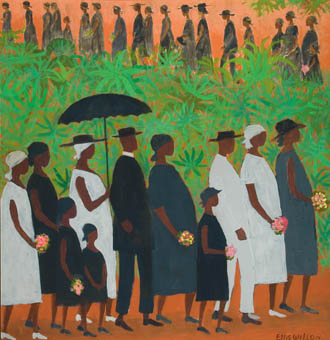 Funeral Procession by Ellis Wilson is owned by the Amistad Research Center at Tulane University.

If Funeral Procession (shown here) by Ellis Wilson (1899â“1977) looks familiar, it"s likely because of the exposure the painting received on TV"s “The Cosby Show.” A replica of the painting hung above the mantle of the fictional Huxtable home for several seasons.


The original oil on Masonite painting, which measures 30 1/2 by 29 1/4 inches, is owned by the Amistad Research Center located on the Tulane University uptown campus.

Funeral Procession is first introduced into “The Cosby Show” in a 1985 episode, when Wilson is written into the story line as Claire Huxtable"s deceased great uncle. Huxtable bids on the painting at auction after it had been lost to her family years earlier and purchases it for $11,000.

In reality, Wilson"s art typically sold for much less and was not widely recognized. But he still made a name for himself in the art community by exhibiting his work throughout the time of the Harlem Renaissance and beyond. Wilson left his home state of Kentucky to study at the Art Institute of Chicago from which he graduated in 1923. He later moved to New York where he exhibited with the Harmon Foundation, an organization that promoted the works of African American artists.

In 1944, Wilson was awarded a Guggenheim fellowship, which he used to travel in the South. He created paintings depicting the lives of African Americans at work, illustrating activities such as making turpentine, selling goods in open-air markets and harvesting tobacco.

Wilson visited Haiti in the early 1950s, absorbing the country"s culture by watching people, eating local foods and listening to the music.

Upon his return from Haiti, he said, “It came to me that at a distance, you see these people coming and going and you don"t see their features. They"re black. They"re a mass of darkness. So I started painting the faces flat.”