Origins of Free People of Color

During the centuries when the transatlantic slave trade prevailed, it was rare for a slave to break out of servitude. But it did happen, and often it was through a legal transaction. Manumission  the act of releasing an individual from slavery  is a topic that has been little explored until now, says Randy Sparks, professor of history. 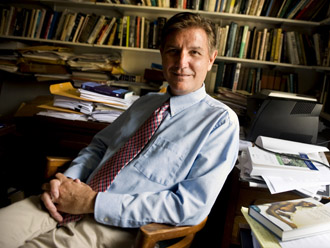 History professor and chair Randy Sparks says that free people of color, black slaves and white masters navigated a complex web of relationships from medieval times to the late 19th century. Sparks is co-editor of Paths to Freedom: Manumission in the Atlantic World. (Photo by Paula Burch-Celentano)

Sparks is co-editor of Paths to Freedom: Manumission in the Atlantic World, published by the University of South Carolina Press this year. He and co-editor, Rosemary Brana-Shute, have gathered a collection of essays by scholars looking at manumission across slave systems  from medieval Spain to the late-19th-century Americas.

"One thing that comes out of these studies is an understanding that manumission is a process," says Sparks. "It's not the single act itself. There's usually a story of some kind that precedes, and there's a story that follows."

Those stories typically navigated a complex web of relationships running from the white community through the slave community to the free black community.

Manumitted slaves were "constantly trying to reach back into slavery and pull out their own relatives or loved ones," says Sparks, who also is chair of the history department.

A manumitted slave could be a house servant granted her freedom as a reward for faithful service or a male slave freed to serve in a militia organized by whites.

Male slaves who were bricklayers and carpenters sometimes were allowed to self-purchase their freedom when their masters hired out their labor.

"They are, in fact, paying the owners, often at full-market value or even above it, for their own freedom," says Sparks.

Rates of manumission were highest in urban areas and lowest on rural plantations. "Wherever you look, though, the rates are very low, probably one slave out of every 500 to 1,000 per year," says Sparks.