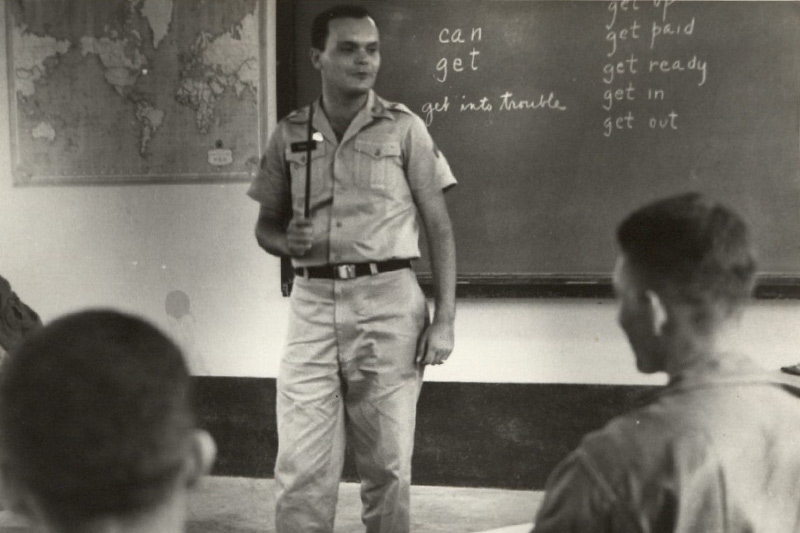 John Kennedy Toole teaches an English class to Spanish-speaking draftees at Fort Buchanan, Puerto Rico, circa 1961–63. Toole was serving in the U.S. Army at the time and reached the rank of sergeant. During his deployment in Puerto Rico, he started writing ‘A Confederacy of Dunces.’ (Photo courtesy of Louisiana Research Collection.)

John Kennedy Toole, author of the 1981 Pulitzer Prize-winning A Confederacy of Dunces, who graduated from Tulane’s College of Arts and Science in 1958, is considered by many to be Tulane’s greatest literary alumnus.

The most extensive collection of Toole’s personal and literary papers in the world is housed in the Louisiana Research Center (LaRC) of the Howard-Tilton Memorial Library at Tulane University.

“Now, researchers in Rome, Rotterdam or Rawalpindi can do in-depth research in the Toole papers from their study, their office or their coffee shop.”

Leon Miller, head of LaRC, said, “Research in Toole’s papers has been consistent and ongoing. They are constantly explored by researchers from around the world, and that’s why we’re so excited to offer the Toole papers online. Now, researchers in Rome, Rotterdam or Rawalpindi can do in-depth research in the Toole papers from their study, their office or their coffee shop.”

The collection includes letters, photographs, manuscripts, and even elementary and high school essays. When taken a piece at a time, the collection reveals a brilliant young man whose precocious, warm-hearted wit happily transcends the caricature of the tortured artist that often clings to him today. (Toole died by suicide in 1969, years before A Confederacy of Dunces was published in 1980. His mother’s persistence and introduction of the manuscript to novelist Walker Percy led to the book’s publication.)

Of particular interest are the letters Toole wrote home to his parents in New Orleans from Puerto Rico, in 1962, when he was serving in the U.S. Army as an English teacher to local recruits. It was in Puerto Rico that Toole wrote the bulk of Confederacy, and in these letters one encounters the great literary comedian at the height of his powers.

Sam Ferguson received a Bachelor of Arts and a Master of Arts in English from Tulane University School of Liberal Arts in 2014 and 2015, respectively.