The Tulane Society of Parent and Family Involvement within the Division of Student Affairs presents a way of helping parents with sending their students off to college. 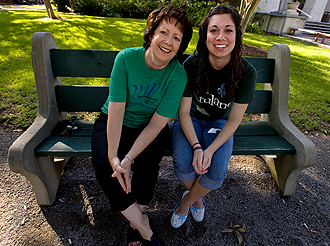 Laurie Orgeron, left, a very informed parent (V.I.P.), here with her daughter, Ericka Orgeron, is part of the Tulane Society of Parent and Family Involvement as a representative from the South. (Photo by Paula Burch-Celentano)

The Pelican Parent Partners program offers an e-mail database filled with “experienced” parents who are open to answering questions from new Tulane parents about the university and the city.

The experienced parents also can provide tips on coping with the transition to college. The program has proven successful since its inception one year ago, according to Maylen Aldana, assistant director for parent programs and student transitions in student affairs.

“Parents who are new to the college experience tend to have many questions,” Aldana says. “We came up with the idea and got the program running last year and the feedback has been really positive. Along with making a new friend, having another parent validate their concerns makes it real to them.”

The 2008 database consists of 21 parent volunteers from Northern states, 18 parents from Southern states, nine from Midwestern states and six parents from states in the West, who have made available their e-mail addresses, hometowns, the names of their students and the students' majors to other Tulane parents. Although all parents of Tulane students are members of the parent society, each Pelican Partner must have a student who has completed at least one semester at Tulane.

The database has increased since 2007 when only 20 parents volunteered, says Aldana. Of those 20 parents, 16 agreed to keep their information in the database for 2008.

“The purpose of the parent society is to foster communication among the university and the parents of undergraduate students,” says Aldana. “The society identifies opportunities for all parents and family members to participate in their students' Tulane experience and to interact with other parents.”

Aldana says the most popular parental questions concern preparation for the move into the residence halls, June orientation, Welcome Week and fun things to do in New Orleans.

“We tell new parents about the service through our e-newsletter and we get to recruit Pelican Partners during parent/family weekend, which is going to be held Oct. 3â“5 during this year's homecoming,” says Aldana.

Pelican Partners are asked to make a commitment to the program from May through December. Following the student's completion of a full academic year, the parent is considered a “V.I.P.” or very informed parent within the society.