Toeing their party lines carefully, eight members of Congress took on the hot-button issue of the nation's energy policy at Tulane University on Monday (July 28), agreeing about little except the obvious need to air out the complex issues. 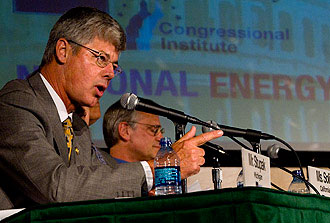 At a Congressional debate on the Tulane uptown campus on Monday (July 28), Rep. Bart Stupack (D-Mich.) calls Republican energy policy “all hat and no cattle." (Photos by Paula Burch-Celentano)

The A. B. Freeman School of Business' Entergy-Tulane Energy Institute hosted the third round in the national series called “Congress Debates,” featuring eight members of the U.S. House of Representatives. The debate, held at the Lavin-Bernick Center, was sponsored by the Democratic Leadership Conference and the Congressional Institute, along with Tulane.

“We believe this is the kind of bipartisan discussion people want from their Congress,” said Mark Strand, president of the Congressional Institute, in his opening comments. “An event like this, and public servants like these, will help restore Congress in the eyes of the voting public.”

If the audience of nearly 300 people came anticipating answers, they were treated to little more than partisan arguments rife with the finger pointing one would expect.

While Strand promised a debate “away from the news bites and 30-second campaign commercials,” representatives toed their respective party lines from start to finish.

The party positions in the sometimes-heated debate touched on topics from drilling in Arctic National Wildlife Refuge and opening up drilling on the outer continental shelf as a means of lowering sky-high energy prices.

“America is addicted to oil,” said Stupak. “But instead of developing new energy resources, President Bush and the Republicans are demanding more drilling.”

Stupak noted that the debate took place on the third anniversary of the Republican Energy Policy Act of 2005, a policy the Democrats called a total failure. The Republicans fired back, saying that the blame for high energy prices lays at the feet of Democrats in power.

“One of the problems in the last year-and-a-half is that amendments to allow for more drilling have been stopped at the very start,” Upton said. “The Speaker [Nancy Pelosi] has stopped those votes and we've not been able to proceed, even to first base, to reaching a comprehensive plan on allowing for more supply which would put some downward pressure at the pump.”

On the topic of conservation and reducing domestic demand, the blame was consistently tossed across the aisle.

“When it comes to efficiency and conservation, [the Republicans] are for none of the above when it comes time for voting,” said Inslee. “That's why it took Democrats to pass the first meaningful efficiency standards in air conditioning, heating, cars and trucks in 50 years.” 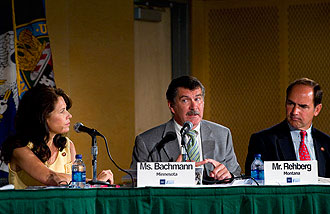 The G.O.P representatives fired back.

“That is a bunch of bunk,” Wamp said. “[Democrats] don't have an exclusive on this issue. We are on the offensive now on everything, including conservation first, efficiency second, new technologies third and more capacity. They're saying 'you've never been for this.' That's poppycock.”

Despite the lively debate, there was some accord, when Inslee invited Upton to be the first Republican to cosponsor a bill that would create a national high capacity grid system to accommodate solar and wind resources. Upton said he could support it assuming there are no hidden provisions in the bill.

Over the crowd's laughter, moderator Cummings called the agreement a “minor miracle.”

Eric Smith, associate director of the Entergy-Tulane Energy Institute, said he was pleased with the turnout and what the debate contributed to the ongoing energy discussion.

“I think the most important thing to take away from it is that it's not black and white,” Smith said. “Whether you're a Republican or a Democrat, the other side has some good points. Either/or is a waste of time, we're going to need it all [conservation, new domestic oil production and renewable resources].”