One of the world's biggest biotech companies has announced plans to launch large, multicenter trials of a promising new diabetes therapy originally developed by researchers at the Tulane University Peptide Research Lab. 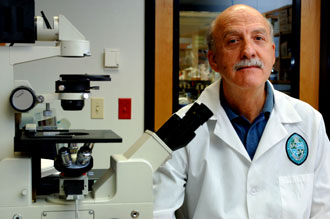 A new diabetes therapy developed by David Coy, research professor at the Tulane School of Medicine, and colleagues will be tested in phase III clinical trials. (Photo by Paula Burch-Celentano)

The treatment, developed in collaboration between Tulane researchers and the French pharmaceutical firm Ipsen SA, will enter phase III studies with patients. These clinical trials are aimed at being the definitive assessment of how effective the drug is, compared to current treatment.

Roche Holding AG is developing Taspoglutide, a once-weekly injection therapy based on GLP-1 analogue peptides that lower blood sugar and help with weight loss in patients with Type 2 diabetes. Roche licensed the drug in 2006 from Ipsen SA, which licensed the patent from Tulane.

“It's part of a family of peptides we've been working on for many years,” says David Coy, research professor at the Tulane School of Medicine. “It's a peptide that increases the release of insulin and at the same time it decreases the release of another peptide called glucagon. This makes it particularly useful in early-phase diabetes for patients who do not require insulin yet.”

Earlier this month at an American Diabetes Association meeting in San Francisco, chief executives for Roche and Ipsen said Taspoglutide “has the potential to be a best-in-class treatment” for type 2 diabetes. The drug is considered the most advanced of seven diabetes drugs Roche has in development.

“GLP-1 and its analogs have great potential for treating diabetes,” says Dr. Vivian Fonseca, professor of medicine and pharmacology, who holds the Tullis Tulane Alumni Chair in Diabetes. “Taspoglutide is an interesting analog as it is longer acting than the others. However, it will come to the market relatively late compared to the competition.”

A similar drug already on the market is Byetta, a GLP-1 analogue derived from Gila monster venom. It must be administered twice daily. The advantages of Taspoglutide are that it's delivered once a week and is derived from a human peptide structure, Coy says.

“From what we can see  and from what the analysts are saying  we have a good chance of being the market leader on this because of the ease of administration,” Coy says.

“If this becomes an important diabetes drug, royalties would be quite substantial,” Coy says. “Nevertheless, it's quite hard to predict what the final market size for this will be.”

Coy's lab has two other patented peptide drugs that eventually reached the market: Decapetyl, a drug for prostate cancer, and Lanreotide, a treatment for a rare endocrine disorder that causes gigantism.