While Denali Lander has known for most of her life that she'd one day become a schoolteacher, Samantha Sanacore and Eric Sweeney didn't decide to become educators until they were students at Tulane. Now all three have graduated from Tulane and have been accepted as new corps members for Teach for America. They will begin teaching in New Orleans public schools this fall. 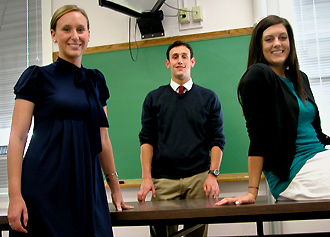 Like the more than 35,000 college graduates nationally who applied to Teach for America, Lander, Sanacore and Sweeney have a desire to make a difference in the world. But they want to focus their efforts on one corner of the world  New Orleans.

“When I arrived back in New Orleans [in January 2006] after the hurricane semester, I began looking for a way to get involved in the rebuilding effort,” says Sweeney, a psychology major from Sugar Land, Texas. “I started tutoring at a local charter school where I was astounded to learn that some of the 7th- and 8th-grade students were having trouble reading.”

Realizing that his help was making a difference, Sweeney continued tutoring for the rest of his time at Tulane. He's now preparing to teach science at a New Orleans public school this fall.

Thomas Hayes, managing director of development at Teach for America, reports that 94 members of the Tulane class of 2009 applied to the program. That's nearly 10 percent of the graduating class, up from last year's 6 percent. Of those who will be accepted into the program, Hayes says, half will complete their two-year Teach for America commitment at schools in the greater New Orleans area.

Their experiences as members of the “Katrina class” are among the chief reasons the 2009 graduates give for wanting to join Teach for America in the city, says Hayes. The Katrina class graduated on Saturday (May 16), nearly four years after the Aug. 29, 2005, hurricane struck the Gulf Coast. The storm caused massive destruction and disruption, including the suspension of the entire fall 2005 Tulane semester, but it also resulted in a strong bond between the students and the city.

Sanacore, who is from North Bellmore, N.Y., also will teach science in a New Orleans public school this fall. She hadn't planned on being a teacher before she came to Tulane, but now she is looking forward to making a difference by empowering youth.

“I've fallen in love with this city,” says Sanacore, who graduated with a double major in political science and anthropology. “I've been given great opportunities during my time at Tulane. I feel it is appropriate to invest myself in the development of my new home city. ”

Lander, a Boulder, Colo., native, has always wanted to teach, and she is pleased to contribute to the ongoing recovery of New Orleans schools by teaching language arts. “My goal is to help some of the children of this city gain confidence in their abilities and realize and believe in the opportunities for their future.”

She adds, “I want to play a role in making public education a successful model in this city.”

Upon applying to Teach for America, applicants are asked to specify their geographic teaching preferences. Sanacore, Lander and Sweeney will not know which schools they have been assigned until mid summer, but all three will remain in New Orleans.