Tulane University athletics searched nationwide to find the next head coach for its volleyball team, but the top candidate was right on campus. Six-year volleyball assistant coach Sinisa Momic became the new head coach of the Green Wave on Monday (March 23). 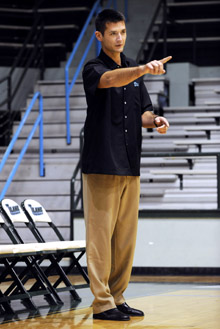 After six years on the Tulane volleyball coaching staff, Sinisa Momic takes over as the new head coach. (Photo from Tulane athletics)

Athletics director Rick Dickson announced the appointment. The eighth volleyball coach in Tulane history, Momic replaces Liz Kritza, who left the Green Wave to accept the head coaching job at the University of Colorado in February.

Momic was responsible for successfully recruiting the bulk of the 2008 roster that helped the team go 26-8 last season, win the Conference USA regular-season and tournament titles and advance to the NCAA Tournament for the first time in school history.

Momic “brings a lifelong journey of experiences  both as a player and as a coach  at very high levels including the past four years as top assistant in the Tulane program,” Dickson said. “Sinisa has been a critical mainstay in recruiting, development and tactical game planning for our team, and this continuity will afford us the greatest opportunity to continue the goal of achieving elite status with our women's volleyball program.”

Arriving at Tulane midway through the 2002 season, Momic served the latter portion of that year and all of the 2003 season as a volunteer assistant under then-head coach Betsy Becker. He became the team's second assistant in 2004, and when Kritza took over the program in 2005, Momic was tabbed the team's No. 1 assistant and recruiting coordinator.

Momic's recruits have gone on to rewrite the Tulane volleyball record book, including Sara Radosevic, who completed her career as the Green Wave's career leader in service aces (197) and kills per set (4.73); Luna Rebrovic, who finished the 2008 season third in Tulane career assists (3,359); and Bridget Wells, whose 1,211 kills and 261 blocks rank 10th and 12th in Tulane history, respectively.

“Obviously, this is a great honor and I am grateful that people here at Tulane University considered me and are appreciative of what I've done for the last six years,” Momic said. “I believe I have a clear picture of what needs to be done not only to keep this program where it is now, but stabilize it and keep it there every single year.”

A native of Zagreb, Croatia, Momic has been able to open the international pipelines of recruiting to the Tulane program that helped land four stars on the 2008 Green Wave team. While Momic's collegiate coaching experience is limited to his time at Tulane, he brings a wealth of knowledge both as a player and a coach in his native land.

Momic is married to the former Lacey Vicknair, who played both volleyball and basketball for the Green Wave.