“We create our own heroes” in the wake of disasters, said Joseph Contiguglia, clinical professor of environmental health sciences, as he spoke during a seminar on disaster management sponsored by the Tulane Office of Global Health. 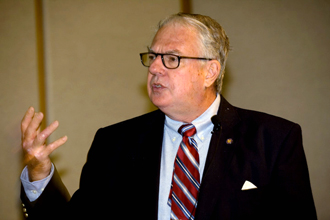 Joseph Contiguglia, clinical professor of environmental health sciences, speaks about the need for planning for disasters during an interdisciplinary seminar on Monday (March 16). (Photos by Rick Olivier).

Contiguglia stressed the need for planning, particularly in preparing community members who may be called upon to respond. Developing guidelines in advance, based on science, he said, provides all involved with reasonable anticipation and expectations.

A retired colonel in the U.S. Air Force, Contiguglia was among Tulane faculty members from three different schools who shared varying perspectives during the seminar on “Disasters: The People, the Places and the Interventions” on Monday (March 16) in the Collins C. Diboll Auditorium on the downtown campus.

It was the first in a series of interdisciplinary seminars held by the School of Public Health and Tropical Medicine.

Nancy Mock, associate professor of international health and development, moderated the panel and opened by acknowledging that audience members understood why the topic was so important.

“The exponential increase in the frequency of natural disaster events, the rise in terrorism and intentional disasters, the shift in the global world order, and now the threat of economic collapse  all of these things unfortunately make our field something of a growth industry,” Mock said. 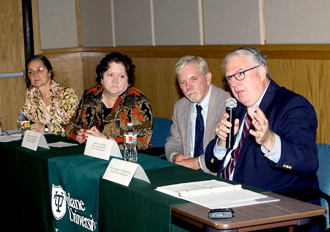 Jane Parker, clinical associate professor of social work, presented the social-behavioral dimension of disaster management. She shared two sobering statistics: There is an average of one disaster per day somewhere in the world and one disaster per week in the United States.

“Clearly,” Parker said, “all of us here have our work cut out for us  whether that's as a responder, a researcher, a teacher or some other role.”

Steven Nelson, associate professor and chair of the Department of Earth and Environmental Sciences, presented three case studies  the 2004 Indian Ocean tsunami, the 1985 Nevado de Ruiz mudflow and Hurricane Katrina  each of which demonstratedhow a lack of proper preparation and education compounded trauma caused by natural disaster. Even in such dramatic events, he warned, complacency frequently returns and makes continued community awareness and education vital.

Nelson captured the essence of the panel's message:“We must do a better job of educating the general populace about the threats inherent in living on a restless planet.”

The Office of Global Health was created through funding from the Framework Programs for Global Health, a program of the National Institutes of Health and the Fogarty International Center.

The office officially will open during a ribbon-cutting ceremony on April 22 in the School of Public Health and Tropical Medicine building at 1440 Canal St.

Dee Boling is the director of communications for the School of Public Health and Tropical Medicine.