Perspectives on a Memorable Year

With the successful conclusion of its 10-year capital campaign, the arrival of a freshman class that exceeds pre-Katrina numbers and a visit by a presidential candidate who would become the first African American president in the nation's history, it would be fair to say Tulane University had a memorable 2008. So did members of its community, from a variety of personal and professional perspectives. 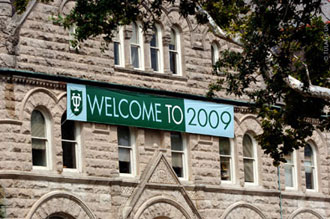 Here's to many more memorable moments in 2009. (Photo illustration by Tracey Bellina O'Donnell)

“The most significant event for me in 2008 was the successful completion of 'Promise and Distinction: The Campaign for Tulane University,'” said Tulane President Scott Cowen. “In a year of many highlights, this particular achievement stands out because it is the first step in realizing all of our future hopes and aspirations as a university.”

Political pundit James Carville, who will teach his first course as a Tulane professor of practice in the spring semester, said, “My 2008 highlight has certainly been moving back to New Orleans, a city I am proud to call home. I am looking forward to getting back into the classroom in 2009.”

Greg Southworth, the university's emergency director, said without doubt Hurricane Gustav was the most memorable event of 2008. “I was absolutely impressed with the way the entire university responded to the hurricane,” Southworth said. “The evacuation went smoothly, our 'storm teams' who stayed for the event were outstanding, and the recovery/restart of normal business was quick and efficient.”

For some, 2008 saw the fruition of years of hard work. Athletics Director Rick Dickson said the highlight for him was leading the successful effort for Tulane and New Orleans to land the bid to host the NCAA Men's Basketball Final Four in 2012. “This will include hosting the first and second rounds for 2010, Elite Eight in 2011, and Final Four in 2012, and should be approximately $200 million in impact, demonstrating another example of Tulane's importance as a leader and catalyst for New Orleans,” said Dickson. 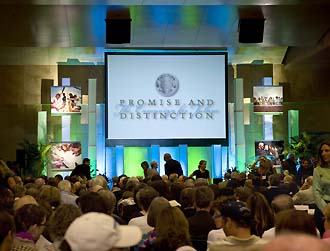 The successful completion of “Promise and Distinction: The Campaign for Tulane University,” is announced at homecoming. (Photo by Paula Burch-Celentano)

Mike Aertker, associate director for administration and operations at the Tulane National Primate Research Center in Covington, La., looked back with satisfaction at the dedication of the center's new regional biosafety laboratory.

“It was the culmination of five years worth of work from the grant-writing process through design and then construction of an extremely complex facility,” Aertker said. “This building will allow for new programs, world-class work on emerging infectious diseases and support of the nation's biodefense program.”

Others found it difficult to pinpoint one specific moment. Several people recalled the overall enthusiasm of students.

“We have so many dedicated and devoted students working in the public interest to meet the legal needs of the underserved in our area,” said Julie Jackson, assistant dean for public interest programs at the Tulane Law School. “The combined contributions of these students make an incredible difference in all the lives they touch.”

For B. Michael Howard, professor of musical theater and chair of the music department since July 2008, it was the “â¦ moment of recognition and inspiration in the Musical Theatre Workshop students' eyes when they are performing” that stands out as a highlight of the year. 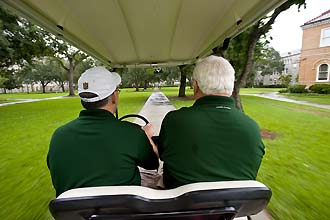 Who would think that a meeting would be a highlight of someone's year? For Molly Travis, who became the interim executive director of the H. Sophie Newcomb Memorial College Institute last summer, the most significant event of the year happened in her first month on her new job when she met for the first time with the board of the Newcomb Alumnae Association.

“I found this group of women  from a range of ages and professions  to be pragmatic and progressive,” Travis said. “They have been deeply touched by their Newcomb experiences and are firmly committed to Newcomb's core mission of enhancing the educational experience of undergraduate women, but they understand that the shape of the experience has necessarily evolved across generations. These positive and dynamic alumnae as well as the like-minded staff of all programs and offices in the Newcomb College Institute convince me that the future is bright.”

Dr. Jeanette Magnus, Cecile Usdin Professor in Women's Health, revisited Taiwan to see two women's health centers established since her last visit in 2006. At the Show Chwan Health Care System, Magnus met with Dr. Ming Ho Huang, who has visited Tulane often and has followed the advancement of the Tulane-Xavier National Center of Excellence in Women's Health, which Magnus directs.

“It was amazing to see how colleagues of a different tradition and culture translated the models we had developed and created their own twist on a women's health center,” Magnus said. “I think that through activities and initiatives like this, Tulane University acts locally as well as globally to better the life of all community members.”

Finally, for many in the Tulane community, highlights from the year were personal moments. Herb LaSalle, who works in the university mailroom, celebrated his 82nd birthday with a six-foot birthday card presented to him by coworkers. 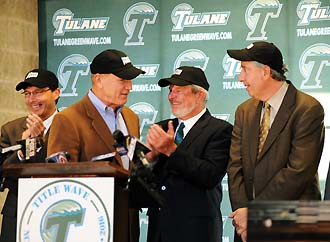 Gaurav Desai, chair of the English department, also had a personal moment that he will probably be fondly remembering when he is 82. Desai served as the primary host for author Salman Rushdie, who spoke to a standing-room-only audience in Dixon Hall in the spring.

“I was delighted to have his company in both formal and informal settings,” Desai said. “A moment that I will never forget took place after dinner at Emeril's later that night. We had been talking about him signing a few copies of Midnight's Children that we could give to some of our supporters of the English department, but the day had been so full of events and excitement that he had never gotten around to signing them. And now it was time to say goodnight. So, right there, on the side of Tchoupitoulas Street, I opened up the trunk of my car, whipped out the 15 or so copies, and he signed them with the valet and my creative writing colleagues looking on. Rushdie and I both come from the city of Mumbai [formerly Bombay], and I found this particular moment to be a particularly Mumbai moment.”

Here's to many more memorable moments in 2009.