It has been said that a person should look within for valuebut beyond for perspective. Perhaps with this in mind, Tulane senior Stephen Frapart has beenworking diligently to ensure his fellow students are given views from “beyond.”In organizing “Perspectives: A Leadership Speakers Series,” Frapart has createda vehicle through which he has brought to campus highly sought speakers such asColin Powell and Stephen Covey. This year, the series kicks off on Tuesday(Oct. 7) with Wendy Kopp, chief executive officer and founder of Teach forAmerica. 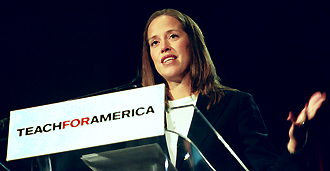 Wendy Kopp, chief executive officer and founder of Teach for America, is the first speaker in this year's 'Perspectives' series. (Photo by Jean-Christian Bourcart)

Frapart, a finance major, said he strives to bringmotivational speakers to campus in order to give fellow students an opportunityto learn from successful leaders, but also to build support for the city'sefforts to rebuild.

“I think it's important for students to improve the city,and I'm just doing my part in improving our school and our city and giving usall a chance to learn something along the way,” he said.

Last year, Teach For America placed 250 corps members in the New Orleans area and accepted 24 Tulanegraduates into the program. With the organization's strong presence in thearea, Frapart figured an appearance by Kopp would be an excellent way to setthe tone for this year's series. “I wanted to have leaders who had ties to ourcommunity and could really speak to students about the issues we face,” hesaid.

As part of her senior thesis as an undergraduate atPrinceton University, Kopp outlined a plan to recruit recent college graduatesand professionals to teach in low-income neighborhoods and help ignite amovement to promote equity in education. Upon graduation, Kopp founded TeachFor America and has spent the past 18 years developing the corps into a programthat attracts some of the nation's brightest young men and women.

In keeping with his conviction that students should beexposed to motivational leaders, Frapart also helped organize an opportunityfor 27 Tulane students to meet with investor, businessman and philanthropistWarren Buffett in Omaha, Neb., on Oct. 17.

In November the Perspectives series will continue on campuswith a lecture by David Bonderman, a founding partner of Texas Pacific Groupand its Asian affiliate, Newbridge Capital. Now listed on the Forbes 400 ofwealthiest Americans, Bonderman in 1967 and '68 was an assistant professor atTulane University Law School.

CNBC's hit finance program, “Mad Money” hosted by Jim Crameralso will visit campus in November as part of the “Mad Money: Back to SchoolTour.”