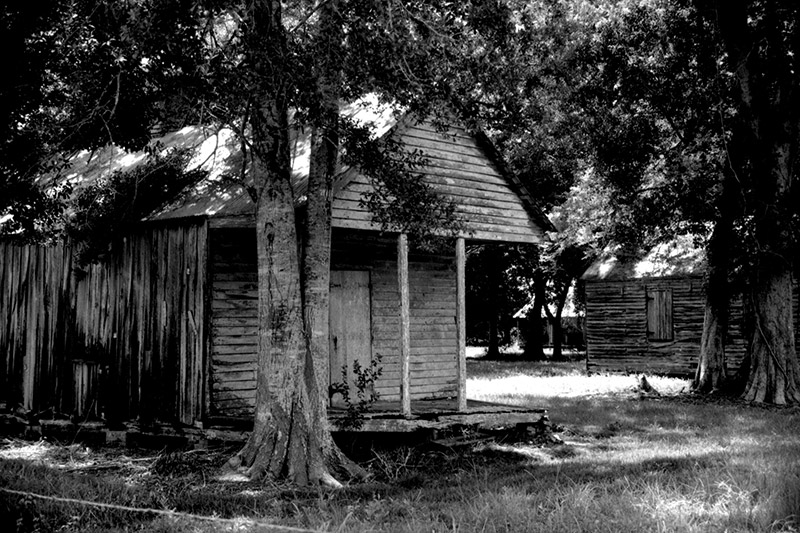 Philip Denman captures a black-and-white image of a structure at the Laurel Valley Plantation in Thibodaux, Louisiana. (Photo from the Southeastern Architectural Archive)

The Southeastern Architectural Archive (SEAA) at Tulane University will showcase nearly 40 years of photographic coverage of Laurel Valley Plantation in Thibodaux, Louisiana, during its latest exhibit featuring the work of Philip Marin Denman.

The exhibit opens Sept. 14 and will feature an opening-night reception that evening from 5:30–8 p.m.

In 1978, Denman began documenting the more than 100 buildings on the plantation grounds, each dating from the 1830s to the 1900s. Denman returned in 2005 to record the condition of the plantation 27 years later, and again in 2017 to photograph the 55 or so remaining structures.

“The fact that the original owner’s house was destroyed at the beginning of the Civil War made Laurel Valley less interesting to most 20th-century photographers,” said SEAA archivist and exhibit curator Kevin Williams.  “They were more interested in the perceived romance of the “big house” and the lives of the owner's families.”

Williams said Denman’s fascination with former slave housing and other types of worker housing for plantations is of great importance to researchers since so few images exist.

John Stubbs, who directs the Master of Preservation Studies Program at Tulane, had the opportunity to record the history and existing conditions of Laurel Valley in 1975 as a basis for its potential preservation.

“Philip Denman’s plantation photography also serves as an unmatched tool for measuring change over time,” wrote Stubbs in an article titled “Witness to History” about the photographer’s work. “The bold black-and-white images of Laurel Valley’s outbuildings in their slow states of decay stir wonders about plantation life in the Deep South from the antebellum era through the present.”

A small number of color prints are included in the exhibit.

The opening reception is free to the public and will take place at SEAA, located on the uptown campus in room 300, Jones Hall, 6801 Freret St. It is co-hosted with Tulane’s Master of Preservation Studies Program.

The exhibit remains on display through June 14, 2019, and may be viewed from 9 a.m.– 5 p.m. Monday, Tuesday, Thursday and Friday. The archive closes daily between noon and 1 p.m.