The April 2009 issue of the Journal of Chemical Theory and Computation, the magazine of the American Chemical Society, is dedicated to professor John Perdew of the Tulane Department of Physics in honor of his 65th birthday. 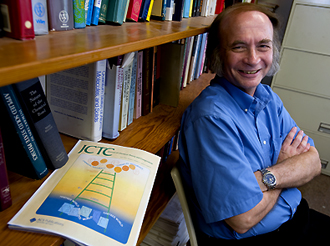 John Perdew, professor of physics at Tulane for more than 30 years, is being honored for contributing to density-functional theory for better understanding of chemistry and physics. (Photo by Paula Burch-Celentano)

“To understand materials and to design new ones with desired properties, we need a theory for the energy of electrons in materials, and a practical way to implement this theory on the computer,” says Perdew.

“Quantum mechanics, discovered in the 1920s, is a complete theory for these effects, but one that can be computed directly only for systems with very few electrons. Density-functional theory replaces the complicated many-electron wave function of quantum mechanics by the simpler electron density, in a way that is computationally practical for larger systems.”

Hired by Tulane in 1977, Perdew found colleagues who shared a similar passion. Among these colleagues was chemistry professor Mel Levy.

“I came to Tulane with the intent of concentrating on density-functional theory,” says Levy, now an emeritus professor. “Wonderful for me was the coincidence that John was hired. The odds were close to zero in those days that two people, in two relatively small departments, would work on the fundamentals of density-functional theory and would happen to have offices about 50 feet apart on the same floor.”

In 1982, Perdew and Levy published an article, “In Defense of the Hohenberg-Kohn Theorem and Density-Functional Theory,” in a quantum chemistry journal. The journal editors labeled the article as a “polemic.”

“Back in 1982, density-functional theory was widely accepted in solid-state physics but not in quantum chemistry,” says Perdew. “Labeling our paper as a 'polemic' was the way the editors could publish our paper without appearing to endorse a controversial approach.”

Since then, a revolution has taken place in chemistry, and density-functional theory is as widely used in chemistry as in physics.

As Perdew reflects on his career at the border of chemistry and physics, he says that what has driven him and his colleagues to study density-functional theory is the tantalizing prospect of coming ever closer to solving the mysteries of matter, which, in actuality, are the mysteries of life.

“I like to guess an answer, and then confirm the guess with logical arguments or numerical evidence,” says Perdew. “Density-functional theory has a mysterious thing that must be guessed: the rule for how the exchange-correlation energy depends on the electron density. We may never know the exact rule in any calculable way, but we are approximating it better and better. I call the exchange-correlation energy 'nature's glue,' because it makes atoms stick together to form molecules and solids.”