In 1992, with the country suffering the hangover from a recession that began two years earlier, Bill Clinton articulated a winning campaign message in the now-famous mantra, “It's the economy, stupid!” Nearly two decades later, the economy again looms as the No. 1 concern on the minds of American voters. But even as the electorate sorts through the substantive issues of the day, voters also are influenced by the personal narratives of the candidates, says Tulane political scientist Tom Langston. 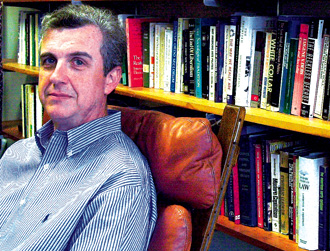 Tom Langston, who has written extensively on the American presidency, says that it is only natural that voters are influenced by personality in selecting the president. (Photo by Jenny Marc)

To the extent that Sen. Barack Obama is ahead of Sen. John McCain in the national polls, Langston suggests that it reflects “a lot of people are simply captivated by the story that we are constructing of overcoming racial division and electing the first African American president in the nation's history.”

A similar attention to narrative also may have influenced the composition of the other ticket. “I do think one reason  just one  that John McCain presumably chose Sarah Palin was to offer voters an opportunity to make history either way they voted.”

Biography and personality play a prominent role in American presidential politics because political parties and partisan identification are weaker in the United States than in other advanced democracies, says Langston, who has written extensively on the American presidency.

“People here are now proud to say they vote for the person, not the party. That's one way to do things, but if you do things that way it is to be expected that your elections become very personalistic, and if you are going to look at the individual candidates, what is more captivating  their income tax proposals or their biography?”

While many political scientists decry the attention given to the personality of the president, Langston disagrees.

“At particular times  more often than it is comfortable for us to realize  in this particular office, personality matters a great deal,” says Langston, who looks back at the last eight years to prove his point. While the postâ“9/11 military action against the Taliban in Afghanistan was a “no brainer” that most persons in the presidency would have chosen, the decision to go to war with Iraq was an elective for which a personality such as Al Gore or even Richard Nixon would not likely have opted.

“Why did George W. Bush elect to go to war in Iraq? For a host of reasons that flow from his personality as well as his beliefs. And those are distinct to him,” says Langston.

For good or ill, “we are a storytelling species,” says Langston. “That is how we entertain ourselves. It's even how we navigate relationships, and we have a relationship with our president, whether we love him, loathe him or ignore him.”