Pipeline to a Future in Research

The Tulane/Xavier Center for Bioenvironmental Research has received a National Science Foundation award totaling $901,120 to enhance a program designed to increase the number of minority students pursuing doctoral programs in environmental research. 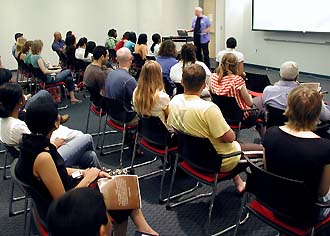 John McLachlan, director of the Tulane/Xavier Center for Bioenvironmental Research, welcomes guests to a presentation by Pipeline Project students who worked alongside researchers at the center during the summer.

Approximately 70 students have already participated in the program, named the Pipeline Project, which is in its 10th year. The National Science Foundation funding adds a novel component to the program and focuses on the area of environmental biology.

John McLachlan, director of the Center For Bioenvironmental Research, said, “The program's strategy is simple: Discover young scientists early on in their careers and encourage them to pursue scientific research as a job option.”

Through the Pipeline Project, students have the opportunity to work alongside researchers at the Center for Bioenvironmental Research during the summer. Researchers also mentor the students throughout the year.

McLachlan said that he is proud that many of the students have enrolled in the interdisciplinary molecular and cellular biology graduate program at Tulane.

Before the Pipeline Project was launched in 1998, only 2 percent of the students in the program were African American, according to McLachlan. Barbara Beckman, professor of pharmacology and former director of the molecular and cellular biology graduate program, worked closely with the Pipeline Project to increase diversity of graduate students in the program to 22 percent within five years. 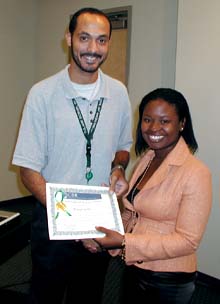 Charles Allen III, assistant director for external relations, left, presents a certificate of accomplishment to Tricia Bellot, one of the Pipeline Project participants.

Pipeline Project participants have come from Tulane and Xavier as well as other universities. They begin their participation as early as their second undergraduate year. Through the newly funded program, participants will begin with an intensive research training short course in environmental biology, followed by laboratory rotations in which faculty members from both Tulane and Xavier will mentor the students.

McLachlan attributes the success of the program to a great partnership between Tulane and Xavier. “We have a very strong working relationship between the two universities,” he said.

According to Xavier University's premedical office, its premedical program is ranked first in the nation for placing African Americans into medical school.

Enrolling in medical school is an attractive option for Project Pipeline participants, said program director Bennetta Horne. But they may change their minds about becoming physicians after participation in the undergraduate research program.

“People get into our program, and the research bug bites them,” said Horne. “They sometimes change from wanting to attend medical school to wanting to get a PhD or they'll go into joint MD/PhD programs.” Horne added that some of the program participants have gone on to pharmacy and dental schools, and they have conducted research in those fields.

The National Science Foundation's Undergraduate Research and Mentoring Program issued a collaborative award for the “Enhancing Diversity in Environmental Biology” project in the amounts of $512,865 to Tulane University and $388,255 to Xavier University.