Pitchman: Peter Ricchiuti hits for the city and Tulane 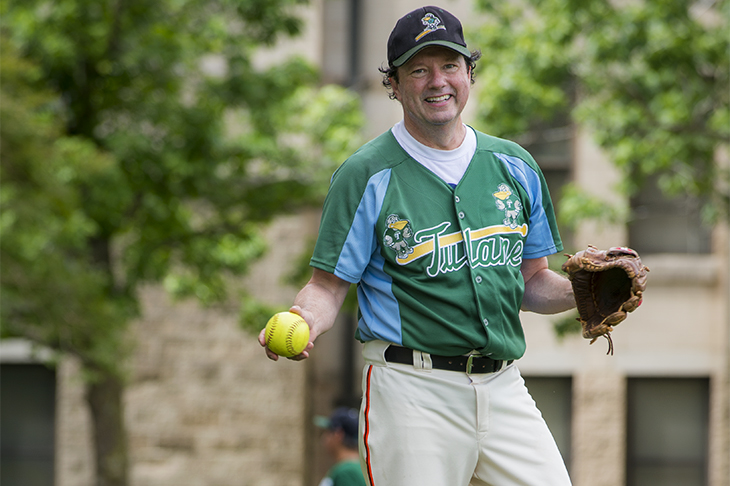 Peter Ricchiuti loves baseball almost as much as the financial markets. The A. B. Freeman School of Business professor plays each Saturday with an alumni group on the Tulane uptown campus. (Photo by Paula Burch-Celentano)

Who is the ultimate pitchman for the A. B. Freeman School of Business, Tulane University and New Orleans? Peter Ricchiuti, the dynamo behind Burkenroad Reports, the “stocks under rocks” award-winning market research program that has helped propel more than 700 Tulane grads into jobs in the financial sector.

Ricchiuti masterfully juggles the roles of a popular teacher who can actually make financial markets fascinating; an author and sought-after speaker on the lecture circuit; a valued mentor to students who"s always on the hunt for job placements; and the host of a weekly, slightly off-beat radio program about New Orleans business that, despite critics who thought otherwise, keeps finding businesses to profile (and has two other Louisiana cities itching to start similar broadcasts).

&#x201c;I tell employers, these students are an asset from the day they walk in the door because of all this experiential learning.&#x201d;&mdash;Peter Ricchiuti, business professor


A listener who heard him lecture: “This guy is "Human Tabasco!"”

Freeman School professor and former dean James McFarland: “His initials are not PR for nothing, right?”

But Ricchiuti also enjoys activities where he can"t “speed things up” like vegetable gardening (heirloom tomatoes and odd-shaped watermelons). As a kid he loved to dig clams by the shore with his family in Massachusetts. “It didn"t matter who you were, you had to wait for the tide to go out!”

Scratch the surface and you"ll discover Ricchiuti has three loveshis wife and two sons, baseball, and the stock market. “If it wasn"t for the markets, I wouldn"t get up in the morning,” he says. “It"s the world"s greatest sport, even better than baseball. Although it"s close.”

Continue reading the article here, or view the full layout from the June 2015 issue of Tulane magazine.