The Louisiana Supreme Court decided Tuesday (July 1) to send a case brought by descendants of Josephine Louise Newcomb, founder of Newcomb College, back to Civil District Court where it began. 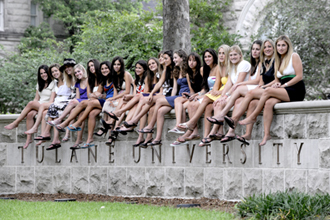 Members of the class of 2008 celebrate graduation. Women students are finding a Tulane education more attractive than ever with women comprising more than 54 percent of the university's fall incoming class. (Photo by Paula Burch-Celentano)

The Supreme Court ruled that the plaintiffs  Parma Matthis Howard of North Carolina and Jane Matthis Smith of South Carolina  must prove to the lower court that they have legal standing as heirs to Mrs. Newcomb before the case can proceed any further.

The plaintiffs, supported by a group calling themselves The Future of Newcomb College, are protesting Tulane's merger of the university's seven undergraduate colleges, including Newcomb College, into the single, unified undergraduate unit named Newcomb-Tulane College. Tulane established Newcomb-Tulane College in late 2005 as part of its restructuring in the wake of Hurricane Katrina's devastation.

Tulane's lawyer in the case, Philip Wittman, said this week's procedural ruling by the Supreme Court means that the plaintiffs must establish their standing as heirs, a designation quite different from descendants.

“There is no condition by Mrs. Newcomb that Tulane must continue Newcomb College as a separate, degree-granting college in perpetuity,” Wittman said.

Tulane's position is that Mrs. Newcomb clearly stated in correspondence with the Tulane Board that when she gave gifts of approximately $2 million more than a century ago she did so giving the administrators control of the funds “with entire confidence in your fidelity and wisdom.”

Mike Strecker, spokesperson for Tulane, said in reaction to the ruling, “Tulane University remains confident that our actions regarding women's education at Tulane are consistent with Mrs. Newcomb's wishes and that her will imposes no conditions.”

Strecker also pointed out that women students are finding a Tulane education more attractive than ever with women comprising more than 54 percent of the university's fall incoming class.

National and regional higher education associations, including the Association of Governing Boards of Universities and Colleges, the American Council on Education, the Association of American Universities, and the Louisiana Association of Independent Colleges and Universities have sided with Tulane in the ongoing litigation, filing amicus or "friends of the court" briefs. The briefs argue that courts should not intervene on behalf of donors or others to deny universities the right to make major curricular decisions.

In reaction to this week's Louisiana Supreme Court decision, the American Council on Education issued the following statement: “Two lower courts in Louisiana and the federal court there have already held that Mrs. Newcomb's will had no condition as the plaintiffs allege. ACE believes that Tulane acted properly and that its actions will continue to be upheld as the case moves forward.”

The next court hearing date has not been set.