Plans in Works for Wetlands Observatory

When the U. S. Geological Survey (USGS) wanted a partner to develop an environmental observatory in the lower delta of the Mississippi River, it didn't need to develop a relationship  it already had one with the Tulane/Xavier Center for Bioenvironmental Research. 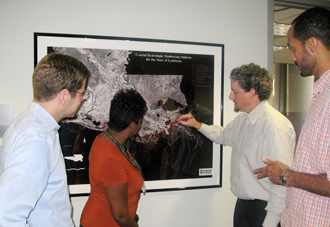 “This is a natural development in our relationship, and it takes place at just the right time,” says John McLachlan, director of the Center for Bioenvironmental Research.

“The importance of understanding this great river and its ecology, and using that knowledge to our advantage, has never been more important. From a science standpoint, coastal wetlands are precisely the place to study the impacts of climate change.”

Researchers from the CBR have been working with support from the USGS for several years now. In their annual meeting that took place in April, members of both groups talked not just about research results, but also about plans for the future.

After a day filled with discussion of current projects and research results, the meeting's second day focused on how the environmental observatory might work. CBR scientists, including Jeff Blum of the Tulane Department of Ecology and Evolutionary Biology, TorbjÃ¶rn TÃ¶rnqvist of the Tulane Department of Earth and Environmental Sciences, and key CBR staff hosted a tour of locations that might provide physical facilities and research sites for the collaborative project.

Before the tour, CBR assistant director Richard Campanella provided a brief summary of the historical and geographic context of the regional estuary system, and CBR deputy director Douglas Meffert described the importance of the project to the inhabitants of the region. 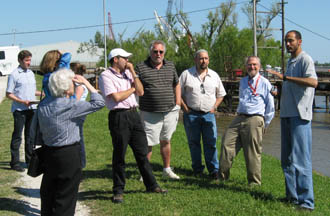 Representatives from the U.S. Geological Survey listen to Charles Allen, right, of the Tulane/Xavier Center for Bioenvironmental Research, on the Mississippi River levee in the lower 9th Ward. (Photo by Pierre Glynn)

“This ecosystem has been providing for the people who have lived here for centuries,” said Meffert in his presentation. “It provided resources, like food and energy, and a means of travel. It also provided services like storm-surge protection and rainwater retention.”

Meffert added that over time, humans have made changes to the landscape that have diminished its abilities to provide those resources and services.

“To restore this ecosystem we really need to better understand its complexities and to have a system to monitor its changes,” said Meffert in his presentation.

McLachlan, who also is a professor in the departments of pharmacology and ecology and evolutionary biology, said, “Tulane and the CBR are perfect partners for the USGS in this project.

"We sit in these wetlands, we have partners in the region's communities, we have scientific expertise, and we are good at bringing collaborators together and enhancing our overall research capacity.ȁ#x201d;

Robert Wallace is a senior program manager at the Tulane/Xavier Center for Bioenvironmental Research.