James Carville, CNN commentator and the political strategist who led Bill Clinton's 1992 presidential campaign to victory, has joined the faculty of the Tulane University Department of Political Science as a professor of practice. His debut course, “The 2008 Presidential Election,” a scrutiny of how the historic election evolved over time, will be offered in spring 2009. 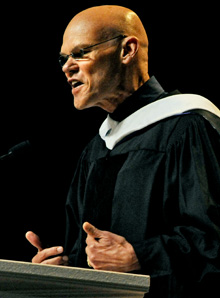 James Carville, who along with his wife, Mary Matalin, gave the keynote address at Tulane commencement this year, will teach his first class at Tulane in the spring semester. (Photo by Paula Burch-Celentano)

“I am pleased to be joining the faculty of such a prestigious university, one that is such an important part of this community that I again call home,” said Carville. “Our class will be an exciting one with nationally recognized guests examining the 2008 election. I am certainly looking forward to getting back into the classroom.”

Anthony Pereira, professor and chair of political science, said he is delighted that Carville is joining the department.

“His class will put the 2008 presidential election under the microscope, combining the insights of high-level political practitioners with the findings of researchers. This is an exciting opportunity for our faculty, students and the entire Tulane community,” Pereira said.

Carville, who appears regularly on CNN's Situation Room and other news programs, began building his reputation as a brilliant campaign strategist in the mid-1980s. His leading role in Clinton's winning campaign of 1992 was documented in the Academy Awardâ“nominated film, The War Room.

He has since worked as a consultant on political campaigns around the world, including the United Kingdom, Canada, Israel and Bolivia. Earlier this year, Carville and his wife, Republican campaign strategist Mary Matalin, relocated their family to New Orleans from the Washington, D.C., area.

Carville and Matalin gave the keynote address at the Tulane University commencement this past May.

Students enrolled in Carville's course will critically examine both the nomination process and the general election. By examining how detailed demographic groups voted, students will conduct a retrospective analysis identifying the factors that resulted in the voting trends leading to the outcome of the 2008 election, and how each campaign attempted to affect voters' decisions. The course will feature weekly guest speakers, including prominent journalists, political party leaders, politicians, pollsters and campaign strategists.