Politics and Race Hit the Stage

In the play Soul of the City, the emergence of machine politics in 1960s New Orleans intertwines with issues of race and segregation. Coauthored by Jim Fitzmorris, assistant professor in the Department of Theater and Dance, the play is the latest production of the Tulane University Lupin Theater. It is showing through Sunday (April 26). 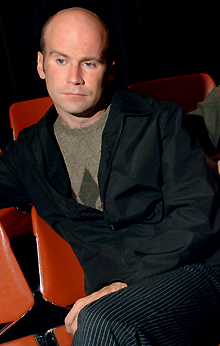 On stage at the Lupin Theater through Sunday (April 26), Soul of the City is the newest play from Tulane's playwright-in-residence, Jim Fitzmorris. (Photo by Paula Burch-Celentano)

The first act  “A Matter of Prospective”  follows a family vehemently opposed to segregation, but fearful of publicly expressing their belief. The second act, “The Big Razoo,” features a story about the effect former New Orleans district attorney Jim Garrison had on the development of Bourbon Street.

“There are people who argue that the French Quarter was never a rival with Las Vegas, but there were a lot of jazz clubs, burlesque shows and real, genuine adult entertainment in the 1960s,” says Fitzmorris, Tulane's playwright-in-residence. “Some say Garrison turned the Quarter into a daiquiri-shop, strip-pole shadow of what it once was.”

Fitzmorris, who wrote the play along with his father, John D. Fitzmorris Jr., hopes that playgoers will be drawn into the history lessons of the play and pulled into the “ferocious debate” among the play's characters about segregation in New Orleans.

“The narrators and characters from history create a living-history situation that takes place from 1950 all the way until Ruby Bridges makes that long and lonely walk to Frantz Elementary School,” he says.

Fitzmorris plans to create a prequel to Soul of the City, collaborating with his father, who is an adjunct professor with the Tulane School of Continuing Studies.

Buzz Podewell, Tulane associate professor of theater, directs Soul of the City. The ensemble cast includes Kameron Moore-Mitchell of Xavier University and Tulane students Ben Piemont and Sarah Yaboa. The production is the theater department's first collaboration with Xavier University, and auditions were open to both Xavier and Tulane student actors.