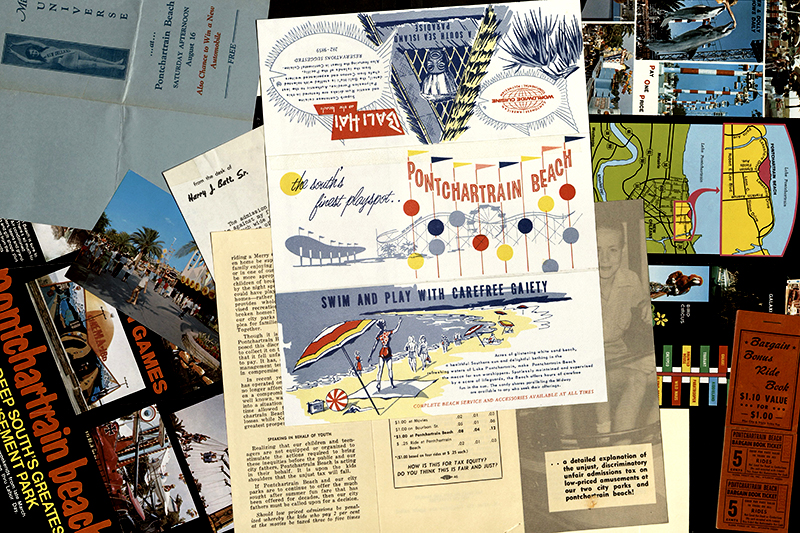 Pontchartrain Beach is poised for a comeback after 30 years. The Lake Pontchartrain Basin Foundation hopes to bring back some of the recreation from the beach's heyday, seen here in old memorabilia. (Images from Louisiana Research Collection)

“The South’s finest playspot … swim and play with carefree gaiety” proclaims a vintage brochure for Pontchartrain Beach from the Louisiana Research Collection at Tulane University. Once much beloved by area families, the beach has been closed for more than 30 years, but now it may be making a comeback.

The Lake Pontchartrain Basin Foundation is pursuing a long-term plan to energize the lakeshore by restoring the sandy beach.

“There is still a lot of nostalgic sentiment that goes along with that beach,” said Michael Liebaert, the foundation’s Pontchartrain Beach Restoration chair.

In May the foundation brought 648 truckloads of sand to the old beach site as the first step toward its restoration. The sand was stored for use in an oil-drilling project, but after it became available, Liebaert’s group raised money to move it to the beach.

Swimmers won’t be diving in anytime soon, though. It will take about two years and a fundraising campaign for $2 million to $3 million to complete the work on a 15-acre site leased from the Southeast Louisiana Flood Protection Authority–East, Liebaert said. The foundation envisions improvements to the shoreline infrastructure, volleyball courts, plazas, walkways, a dog park and dedicated areas for personal watercraft, but a return of the former Pontchartrain Beach amusement park is not part of the plans.

Meantime, the past glory of Pontchartrain Beach — photographs, newspaper coverage, postcards, brochures and even entrance tickets — is preserved in the archives of the Louisiana Research Collection.

Why was that beach so special to New Orleanians? Leon C. Miller, head of the collection, says, “I think it is remembering the joy of being young and without worries or responsibilities. Parks like this were deliberately designed as a shelter, a refuge, from what otherwise might be a demanding world.”