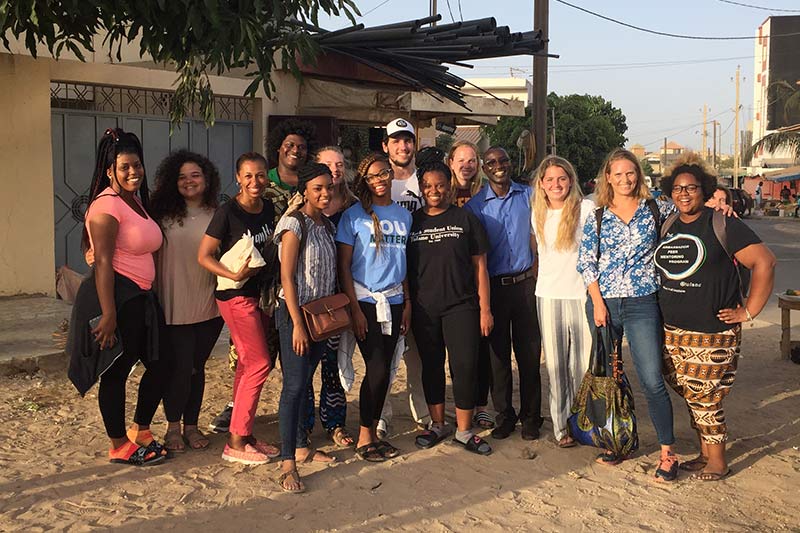 Tulane students ventured to the coast of West Africa during the university’s first short-term Afro Diaspora intercultural learning course in Dakar, Senegal, from May 22–June 1. As part of the one-credit course, Senegal and New Orleans in the Atlantic World, the group participated in a home-stay program, living with Senegalese families.

Annie Gibson, associate director of intercultural learning at Newcomb-Tulane College’s Center for Global Education, designed the course in conjunction with the Council on International Educational Exchange. She managed it along with Carolyn Barber-Pierre, assistant vice president for student affairs in the Office of Multicultural Affairs, and Dauphine Sloan, senior professor of practice and graduate studies adviser for the Payson Graduate Program in Global Development.

Barber-Pierre said that the trip aimed to deepen students’ understanding of the shared history between Dakar and New Orleans, which dates back to the 18th century. Gorée Island, one of Dakar’s 19 districts, was once a depot for slaves who would be shipped to New Orleans and other ports in the New World.

“Keep your eyes out for future program models for Afro Diaspora intercultural learning in the Dominican Republic and Brazil.”

— Annie Gibson, associate director of intercultural learning at the Center for Global Education

“I wanted students to have a cultural immersion experience,” said Barber-Pierre.

The students embraced local traditions by browsing local markets and taking part in a dance and drumming workshop. They also embarked on a pirogue trip up the Senegal River, attended a lecture from local activist group Y’en a Marre and explored Thies, the home of Senegalese textiles.

“Tulane’s Office of Study Abroad (OSA) has made a mission of thinking about ways to incentivize students to study abroad who might not have thought that it could be a possibility,” said Gibson. “The Senegambia region seemed like an important place for OSA to begin such an initiative, given the powerful influence that Senegambia has had on the environment, economy and culture of Louisiana.”

OSA operates as part of the Center for Global Education.

Third-year student Zharia Jeffries, an economics major in the School of Liberal Arts, said that her favorite memory from the trip was riding camels through the Lompoul desert sands.

“It was a life-changing trip. I hope that it broadened the students’ worldview,” said Barber-Pierre.

Like this article? Keep reading: The hidden beauty of studying abroad

New brew will debut at Yulman Stadium on Sept. 2
Photographer at the end of the earth
Jazz lab
Set in motion
Meet ‘Funkboy’ Ivan Bodley and his bass guitar