Chronic stress following Hurricane Katrina contributed to a three-fold increase in heart attacks in New Orleans more than two years after levee breaches flooded most of the city, according to researchers at Tulane University School of Medicine. 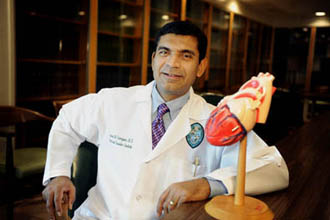 Dr. Anand Irimpen led the study showing a three-fold increase in heart attacks in post-Katrina New Orleans. He is associate professor of clinical medicine at Tulane. (Photo by Cheryl Gerber)

The analysis is one of the first to look at the long-term impact on public health resulting from major disasters such as Hurricane Katrina. Previous studies have found short-term increases in heart attacks and other cardiac events occurring in the immediate hours to weeks after major disasters such as earthquakes or volcano eruptions.

“Our data show that the effects of an acute major disaster are not limited to its immediate aftermath, but can linger on for a prolonged duration,” said lead researcher Dr. Anand Irimpen, associate professor of clinical medicine in the Heart and Vascular Institute at Tulane University School of Medicine.

The study analyzed the number of heart attack patients admitted to Tulane Medical Center in downtown New Orleans two years before the storm and two years after the hospital reopened in February 2006. Researchers compared the two groups (pre- and post-Katrina) based on specific demographic and clinical data such as lab test results, health insurance, first-time hospitalization, smoking status, substance abuse and employment.

There were 246 admissions for heart attacks, out of a total census of 11,282 patients, post-Katrina compared with 150 admissions out of a total 21,229 patients in the two years before the storm. In addition to a three-fold increase in heart attacks and a 120 percent increase in coronary interventions, the post-Katrina group had significantly higher prevalence of unemployment, lack of medical insurance, medication noncompliance, smoking, substance abuse, first-time hospitalization and people living in temporary housing. There were no significant differences in the racial, gender or age distribution of the two groups.

Based on these data, the authors believe reduced access to preventive health services and chronic stress due to prolonged loss of employment, insurance coverage and housing played an important role in the development of heart attacks.

In addition, it appears chronic stress following Katrina may have fostered bad health practices, such as smoking and failure or refusal to adhere to treatment plans. “After a major disaster, people generally tend to neglect their health because they have other priorities,” Irimpen said. “That can lead to serious consequences.”

Irimpen said that further study is needed into the long-term affects of chronic stress and his team will track the rates of heart attacks for another two years. They also will include other area hospitals in the study.