With nearly one in three of Louisiana's children under the age of five living in poverty, and an 81 percent increase in abuse and neglect cases in this age group over the past six years, the question of how to improve the lives of Louisiana's youngest citizens is an increasingly pressing issue, says Geoffrey Nagle, director of the Tulane Institute of Infant and Early Childhood Mental Health. 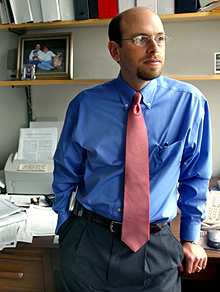 Geoffrey Nagle, director of the Tulane Institute of Infant and Early Childhood Mental Health, is working with the Louisiana Child Poverty Prevention Council to reduce negative effects of poverty on the brains of young children. (Photo by Paula Burch-Celentano)

An associate professor of psychiatry, Nagle made a presentation to the Louisiana Child Poverty Prevention Council in January in which he outlined the benefits of focusing on enriching, nurturing environments for children under five. The legislature created the council in 2008 with the mandate to cut child poverty in half by 2018. The council is required to present recommendations to the legislature on March 1.

Nagle told the council that living in poverty can create toxic stress that negatively affects a child's developing brain, increasing the risk of poor performance in school  but that wise investments can counter this stress.

“Significant adversity early in life, such as poverty, can compromise the developing architecture of the brain. This increases the likelihood of significant problems including impairment in early learning, basic exploration and curiosity, and school readiness, all of which impacts later school achievement,” says Nagle, who already has been successful in advocating with his colleagues for a statewide five-star quality rating system for childcare centers and legislation for universal pre-kindergarten programs.

The stress of poverty can be countered by the presence of loving, nurturing adults who may be able to steer young children towards success in school and therefore better job prospects in later years, says Nagle, acknowledging the challenge of asking for money when budgets are tight.

“Children fare very badly in tight economic times,” says Nagle, who also is associate professor of psychiatry and neurology in the Tulane School of Medicine. “If the state is cutting the budget because we have less money, and the leading experts and economists tell us that the best investments are in children, then let's make sure we all know about that so we can make the best decisions. Cutting investments in young children will only result in longer term economic despair.”

Nagle leads the federally funded Bright Start initiative, which has the task of addressing the needs of Louisiana children under the age of six. The group developed a report titled 2009 Road Map to Economic Success for Louisiana, which argues that investing in programs to improve health, education, social and emotional development, and parenting education and support is the most cost effective way to bolster the state's economic growth, long-term.