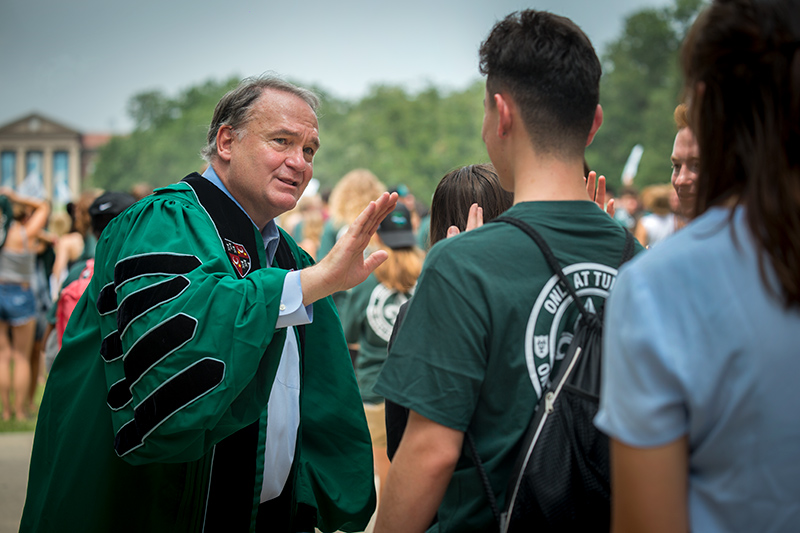 Gathering together for the first time, the Class of 2022 streamed into McAlister Auditorium for the President’s Convocation as the Tulane University Marching Band provided one of many warm welcomes that the students received as new Tulanians.

The sound of Tulane spirit hit a high note as Dr. Michael White’s Original Liberty Jazz Band led a procession of Tulane President Mike Fitts’ cabinet members. As the second-line strolled through the auditorium, many students held up their phones to record the magical moment.

[View photos from the event]

“You are activists, innovators and changemakers poised to shape the future of our world in earth-shattering ways.”

Once onstage, speakers Robin Forman, senior vice president for academic affairs and provost, Dusty Porter, vice president for student affairs, and Kelly Grant, interim dean of Newcomb-Tulane College, were joined by members of Green Envy as special guests. The a cappella group serenaded the cheering crowd with a special remix of the university’s alma mater, complete with beatboxing.

Greeting the class, Satyajit Dattagupta, vice president of enrollment management and dean of undergraduate admission, noted that the auditorium was filled with students who had been painstakingly selected from almost 39,000 applicants.

Dattagupta also shared some trivia with the crowd, noting that the most popular names in the class are John and Olivia.

“One last fun fact — eight of you have a birthday today,” he added before introducing Tulane President Mike Fitts.

Fitts began his annual address by taking a look back at the summer’s most memorable pop culture moments, including France’s World Cup win, the engagement of Ariana Grande and Pete Davidson, and the release of Jay-Z and Beyonce’s joint album.

“But years from now when you think back on the summer of 2018, you’ll remember it for one thing — the moment you became a Tulanian,” he said.

Fitts encouraged students to meet their new peers and surround themselves with a community of those with different points of view during their college experience. He reminded them to take advantage of the tools that Tulane provides.

“You are activists, innovators and changemakers poised to shape the future of our world in earth-shattering ways,” said Fitts. “If you’re an English major, visit the Maker Space and learn how to use the 3D printer. Do something that scares you — whether that means ordering an alligator po-boy or joining the Quidditch team.”

Challenging the class to explore New Orleans and the uptown campus, Fitts announced the return of his annual photo contest. First-year students are encouraged to take pictures of their new surroundings and tag their best shots on Instagram with #fittsphotochallenge by Wednesday, Sept. 5.

“I’ll share the submissions on my Instagram and choose five of my favorites. The winners will join me for brunch at one of New Orleans’ finest restaurants,” he added. “My treat.”

After inviting the students to follow him on Snapchat, Fitts included his new krewe of Tulanians in his first snap story of the year.

“Class of 2022, welcome to Tulane! Welcome home!,” he exclaimed, as he captured the roaring crowd.