President Cowen Goes Back to School

Four weeks to the day after he was evacuated from a flooded New Orleans via helicopter, Tulane President Scott Cowen walked into his office at 218 Gibson Hall, sat down at his desk and turned on his computer -- normal activities for the past seven years he has been at Tulane. 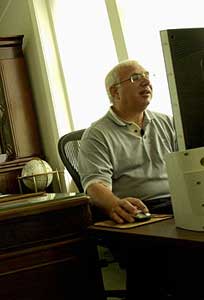 President Cowen returns to his
office for a brief visit when he tours
the uptown campus on Sept. 29.

"I can't describe to you the sense of coming home I had when we drove into Gibson Circle," says Cowen. "It felt so right."

Getting back to New Orleans and to Tulane as quickly as possible has been Cowen's publicly stated goal since Hurricane Katrina shut down the campus for the fall semester and forced a core group of administrators to set up temporary headquarters in Houston.

"From what I am seeing here today, I am confident that Tulane University will be ready to welcome back our students in January and our faculty and staff well before that," said Cowen. "Substantial progress has been made in just a month."

Back in New Orleans Sept. 29 to walk the campus and to assess the work done by Belfor, an international restoration company hired to ready campus buildings for the school's January reopening, Cowen had several quick indications that Tulane and New Orleans are very different places than they were just a few weeks ago.

As Tulane starts its recovery, the school is providing temporary barracks for members of the National Guard. No, that's not the Tulane Green Wave football team on the practice field back by the Wilson Center; rather, it's soldiers letting off a little steam by playing some pretty aggressive touch football.

Back on the front part of campus, as Cowen walked toward his office, he moved carefully down the Gibson hallway, which is full of army cots, soldiers shining their boots, lots of camouflage clothing and a little Louisiana flavor -- several containers of Boudreaux's Butt Paste.

Out on the Gibson Quad is a clothesline strung with socks and underwear that have been hand washed by the guardsmen. "We'll have to move that before Wave Goodbye," joked Cowen.

The campus is alive with hundreds of workers stretched between St. Charles Avenue and Claiborne, working hard in the New Orleans heat to repair Katrina-caused damage.

Accompanying them is a constant chorus of various high-pitched whining noises. Generators pump tons of air conditioning into buildings to remove humidity that comes from days without power, and wood-chipping machines grind up downed trees and branches.

Ten-foot high piles of sawdust on the Gibson Quad attest to the efficiency of those grinding machines, and equally high piles of black plastic trash bags in the middle part of campus hold damp drywall, wet carpet and discarded furniture.

The first two Tulanians Cowen encountered on campus were two 20-plus year employees from the facilities services department, Juan Perez and Tracy Boudreaux. 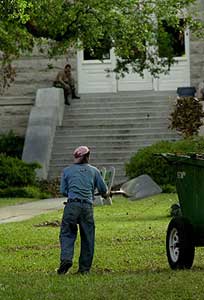 The Gibson quad is being cleared of
storm debris by crews of workers.

Cowen made a beeline to the pair. Turning to the collection of reporters on hand to report about his return to campus, he said, "These guys are the unsung heroes of Tulane University; this is who you should be talking about."

Perez and Boudreaux been working nearly non-stop since Katrina struck campus. The pair, along with electricians Bob Voltz and Brian Oubre, were instrumental in the grim days after the hurricane hit, doing everything from coaxing back-up generators to keep working, to getting abandoned boats and trucks repaired, to ferrying stranded people to safety, including Cowen and the Tulane team who stayed on campus during the storm.

After several hours of surveying the campus, walking from St. Charles to the Reily Center and back to Gibson Hall with Sylvester Johnson, associate vice president of facilities services, and talking with various Tulane employees at every stop, Cowen took a minute to sit on the steps of Gibson and survey "the front door of the university" with its mowed grass and weeded flower beds, all pristine due to the efforts of head groundskeeper Tom Armitage.

"We're getting there," he said as a smile lit up his face.

With that, Cowen left to do a load of laundry (yet another sign of changing times) and get ready for a CNN interview at 7 a.m. the next day, which would be followed by a tour of the downtown campus and the inaugural meeting of New Orleans Mayor Ray Nagin's "Bring New Orleans Back" commission, of which Cowen was appointed a member.

On Saturday Cowen was off to Baton Rouge to watch the Green Wave football team take its record to 2-1 with a win over Southeastern in Tiger Stadium (how much change can we take?) and then back to Houston for meetings with his senior team on Sunday.

A hectic schedule to be sure, but says Cowen, "When the work you do is for something you love, which is how I feel about Tulane University, you'd do twice or three times as much and do it happily."

Click to view a photo gallery of Cowen's visit to campus