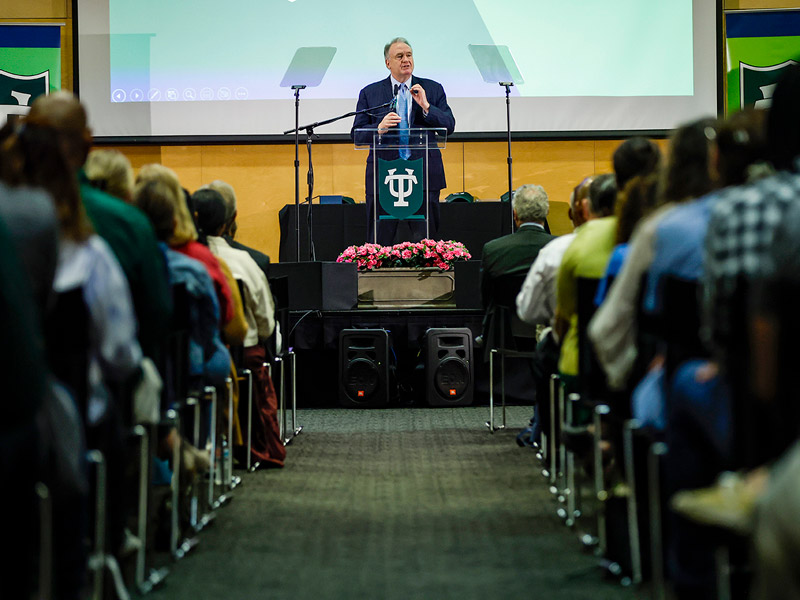 President Michael A. Fitts delivers the 2022 State of the University address in the Kendall Cram Lecture Hall. As part of the addresses, which took place on both the uptown and downtown campuses, President Fitts gave an overview of university progress and presented the Spirit of Tulane Award; the Staff Excellence Awards and the inaugural President’s EDI Excellence Award. (Photo by Rusty Costanza)

“Excellence” was the theme of President Michael A. Fitts’ State of the University addresses, which were held last week in front of enthusiastic crowds of Tulanians on both the uptown and downtown campuses.

Tulane rolled past “three years of challenges, both new and old; three years of pivots, transitions and change” and still achieved “three years of excellence in the face of unprecedented circumstances,” Fitts told staff and faculty assembled in Hutchinson Auditorium, and later that day, in the Kendall Cram Lecture Hall of the Lavin-Bernick Center for University Life.

In research, admissions, construction, finances, fundraising and athletics, Fitts declared the state of the university was “excellent” and lauded those assembled and their colleagues throughout the university for being the key, the “special sauce” that is the secret to Tulane’s success. Using a gumbo metaphor, Fitts recounted the perfect recipe for Tulane’s upward trajectory.

“Your work holds our university together, your teaching nourishes the hearts, minds and bodies of our community, and your research fuels our hunger for a better world,” Fitts said.

“Your critically important work around infectious diseases, health equity, the environment, river and coastal issues, brain health, and many other areas helped usher us to the national forefront of research,” he continued, “and our authors, legal experts, architects and more are bringing to light the issues that will define our society.”

The university, he said, welcomes a variety of voices and experiences.

“We are attracting a new type of Tulanian –  some of the brightest, most ambitious students, faculty and staff in the world – people with diverse backgrounds and perspectives seeking an equitable home for learning, working and research,” he said. “You’ve heard me say it before, but it bears repeating: An equitable, diverse and inclusive university is a great university, and greatness happens at the intersection of different cultures and perspectives.”

Among the highlights of Tulane’s many successes, Fitts noted that:

Tulane is, Fitts said, “a destination for distinctive experiential learning and powerful cultural connections, an institution where you can find your passion and connect that passion with a greater purpose.”

And what better way to thank some of those responsible for Tulane’s continued growth as one of the country’s leading research institutions than to present the President’s Staff Excellence Awards? The awards are presented in December each year, but this was the first time they were announced in front of campus-wide audiences, who were able to show their appreciation for the honorees.

Fitts also presented the inaugural President’s EDI Excellence Award as well as the Spirit of Tulane Award, which he conceived in 2017 to recognize those whom he described as “workplace champions who go above and beyond, the staff members who show remarkable ambition.”

And the winners were: