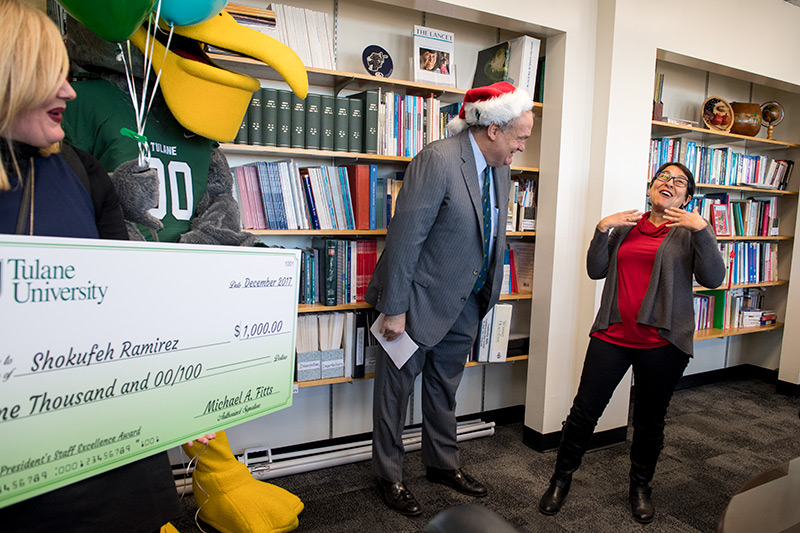 With Riptide by his side and a holiday surprise in store, Tulane University President Mike Fitts strolled into the Maker Space on the uptown campus on Monday. Turning the design and construction hub into a scene from Santa’s workshop, Fitts bestowed Maker Space’s managing team with a President’s Staff Excellence Award and a $1,500 check.

“These awards are given out to the best of the best — people who are not only dedicated to the institution but who go the extra mile,” said Fitts. “What you’ve done, not only for the School of Science and Engineering but for the university, is huge. You have transformed this part of campus.”

This year, the awards were given to 12 honorees — outstanding Tulane staff members who exceeded expectations and contributed to the university by increasing productivity or cost savings within their departments.

“We’re not only thanking you — we’re putting our money where our mouth is.”

Arriving with a handful of green and blue balloons, Fitts also astonished Marc’ Bady, assistant director of the first-year experience for Housing and Residence Life, when he knocked on his office door in Irby Hall.

“I know that you’ve been involved in many different initiatives, especially the first-year dinner participation and expanding the whole residential experience. We’re not only thanking you — we’re putting our money where our mouth is,” said Fitts, as he handed Bady his $1,000 check.

Grinning from ear to ear, Bady exclaimed, “It feels like I won an Oscar!”

“These last couple of months have been extremely difficult, as I lost my mother,” she said. “I’m so blessed to work here at Tulane. Thank you all so much for this honor.” 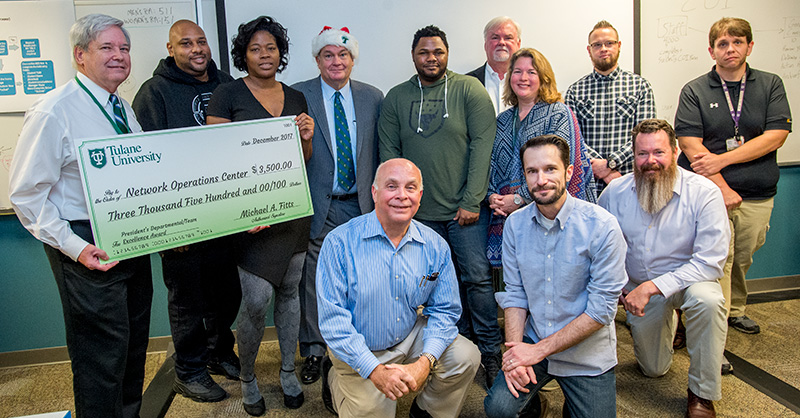