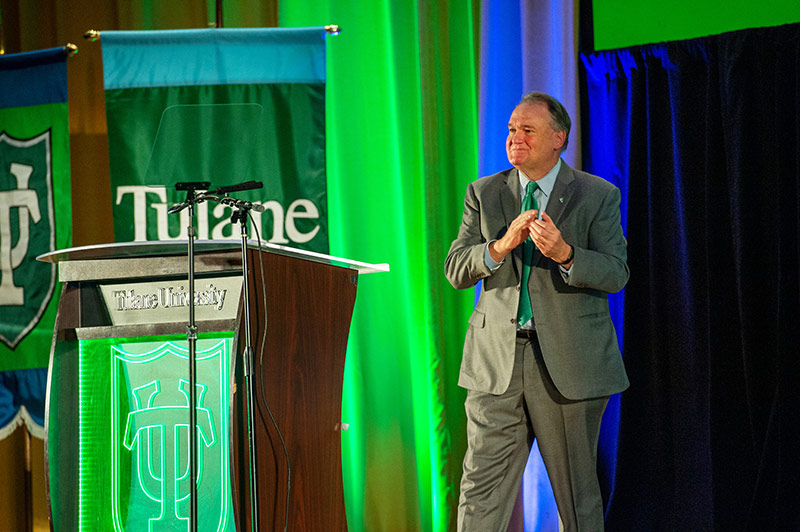 At this year's State of the University, Tulane President Mike Fitts thanked faculty and staff members for their dedication to the university, highlighted the year's past achievements and gave updates on what to expect in the coming year. (Photo by Paula Burch-Celentano)

Tulane University President Mike Fitts thanked faculty and staff members for their hard work and dedication, highlighted the university’s many successes and announced what’s to come in the near future at this year’s State of the University Address on Sept. 6.

Fitts began his address, which was held in McAlister Auditorium and streamed online, by handing out Tulane Spirit Awards to recognize “the workplace champions, who go above and beyond.”

Fitts also recognized two others within “the small, but mighty community” of Tulane’s Office of Emergency Response and Preparedness: Meredith Beers, business continuity manager, and Donald Veals, manager of the office.

Tulane’s admission numbers and the Class of 2023 were highlighted next with Fitts noting that the university received 42,184 applications for the fall 2019 semester and of those applicants, 13 percent were admitted, making the class the most selective and academically accomplished in the university’s history.

Fitts said the class is also the most diverse, with 30 percent of the class being an international student or student of color.

He said it’s an inspiring jump, but there is room to grow.

“When we look back five years from now, the Tulane community will be a better reflection of the world around us.”

Fitts said that with continuing to build more diversity, the campus needs and has provided more support and resources, noting that the Office of Multicultural Affairs will move into their new home in Richardson Hall this spring, and the university is on the search for an Associate Provost for Diversity Faculty Development/Chief Diversity Officer.

With a new position on the horizon, Fitts took the opportunity to introduce some of the newest staff and faculty members of the Tulane community: Lee Skinner, dean of Newcomb-Tulane College, and Giovanni Piedimonte, MD, vice president for research.

Fitts then announced new construction that will take place during the academic year, including a new residential quad - where Bruff Commons currently is – the construction of Steven and Jann Paul Hall, and the renovation of Stern Hall.

He also said that Tulane is in “serious discussions” to become the lead tenant in a highly anticipated, renovated Charity Hospital building downtown.

“A place where Tulanians can go focus on what we do best, education and research,” Fitts said. “It will literally change the world.”

In efforts to continue the mission of telling the “Tulane story,” Fitts announced this fall the naming of Willow Residences in honor of Deidre Dumas Labat and Reynold Décou, the first African American undergraduates to earn degrees from Newcomb and Tulane, respectively.

Additionally, the Office of Multicultural Affairs and the Office of Gender and Sexual Diversity - as well as the new space it will occupy in Richardson Hall -will be named after Carolyn Barber-Pierre, assistant vice president for student affairs. Barber-Pierre ‘s longtime service has been instrumental in Tulane’s movement toward greater inclusion.

Fitts announced that the Bobby Yan Lecture in Media and Social Change will be established in honor of Yan, who founded the Asian American Student Union at Tulane, and a professorship will be named in honor of Luís Guillermo Solís, the former president of Costa Rica.

“It’s a bright future for Tulane,” Fitts said, adding that the state of the university is “strong indeed” and growing stronger every day.

Fitts concluded by thanking faculty and staff again and reminding them that, “The Spirit of the Green Wave emanates from you, the people who make Tulane University a world-class engine for innovation and inspiration.”