On Wednesday afternoon (Oct. 14), Tulane President Scott Cowen threw his calendar out the window after he received a series of hurried phone calls. 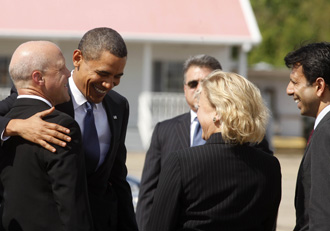 The calls were from highly placed officials in the Obama administration and when the conversations concluded, Cowen's Thursday (Oct. 15) was booked with a series of meetings with cabinet secretaries and President Barack Obama himself.

Along with the appointments and instructions, Cowen received a secret password, “fleur de lis,” to identify himself as an invited guest.

Undoubtedly, the highlight of the day was at the Lakefront where President Obama held a town hall meeting at the University of New Orleans.

Prior to the start of the event, Cowen was led backstage where he joined a small group, including Secretary of Homeland Security Janet Napolitano, Housing and Urban Development Secretary Shaun Donovan and White House Council on Environmental Quality chair Nancy Sutley.

“In the brief time I had with the president I thanked him for the federal government's role in New Orleans' recovery,” Cowen reported. “Then I suggested to him that New Orleans is a model for building vibrant and sustainable communities throughout the United States. 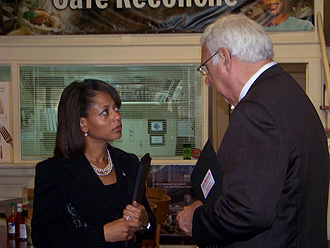 "In fact, I told him I think New Orleans has the potential to be the model city for the 21st century.”

Cowen also chatted with Secretary Napolitano, to whom he had criticized FEMA when they first met a few months ago.

“I was extremely critical of FEMA back then but today I told her what a marked improvement we are seeing. I also complimented her about FEMA's arbitration process to deal with remaining issues, including Charity Hospital, which is so critical for New Orleans.”

Cowen also met with Education Secretary Arne Duncan at John McDonough High School earlier in the day and Melody Barnes, director of the president's Domestic Policy Council, during a visit to CafÃ© Reconcile.

See Cowen's Tulane Talk for more details on those events.