A group of Tulane students has been writing and publishing articles for a website created to cover international issues since fall 2010. Now, they are making another leap as they prepare to release the first printed version of the Tulane Journal of International Affairs. 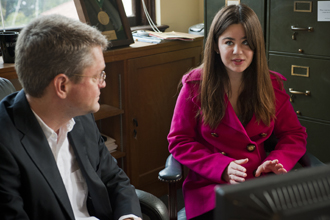 “We cover issues that are relevant and important to us,” says Katie Weaver, editor-in-chief of the journal. Weaver, a junior who is pursuing a double major in English and political science, says the journal's staff of eight has had a print edition as a goal since they began publishing.

Topics in the first edition of the journal include “Poverty and Inequality in Brazil” and “The US-China Bilateral Trade Imbalance.”

“I learned about the journal last year when the students who started it visited my Latin American government class to recruit writers,” says Weaver. “Since then, we've been approved as an official student organization, which makes us eligible for funding by the university's student government.”

With help from faculty adviser Mark Vail, an associate professor of political science, the editorial staff sifted through more than 40 submissions from both students at Tulane and other universities. Using a system that either rejects, accepts with revisions or accepts submissions as is, the submissions were reduced to eight.

“Our audience is primarily Tulane students, but hopefully anyone interested in the field of international affairs and political science will enjoy reading it,” says Weaver.

Four hundred printed copies of the journal will be available in buildings around the uptown campus next week. The electronic version is already available.