Oscar A. Barbarin III, a nationally renowned social psychologist, was invested as the inaugural holder of the Lila L. and Douglas J. Hertz Chair in Psychology on Thursday (Sept. 24). Funded by Board of Tulane member Douglas Hertz and his wife, Lila  both Tulane alumni  the chair was created to address barriers to learning in New Orleans public schools. 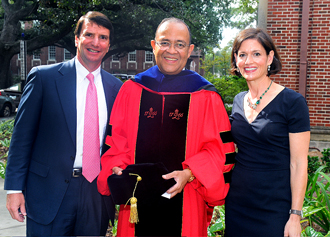 Oscar A. Barbarin III, center, is the holder of a new endowed chair in psychology funded by Douglas Hertz, left, a member of the Board of Tulane, and his wife, Lila, right, along with matching funds from the Louisiana Board of Regents. (Photo by Tracie Morris Schaefer)

Barbarin, formerly the L. Richardson and Emily Preyer Distinguished Professor for Strengthening Families in the School of Social Work at the University of North Carolinaâ“Chapel Hill, described the event as a humbling experience.

"This is an honor for me and a calling," said Barbarin, a native of New Orleans. "It is the beginning of a journey, a time to take a chance, and a time to cross boundaries. My vision is to develop a set of activities into a center for children, families and schools that will work very closely with the public schools of New Orleans."

Tulane President Scott Cowen, who presided over the ceremony in the Freeman Auditorium of the Woldenberg Art Center, praised the generosity of the Hertzes as well as Barbarin's commitment to young children and education.

"There is probably no community in the country that needs people like Dr. Oscar Barbarin more than New Orleans, " Cowen said. "This is not just a homecoming for Oscar. This is also a blessing for New Orleans and beyond."

Barbarin's research focuses on the familial and social environments of young children and their impact on social and academic development. His 20-year longitudinal study on the effects of poverty and violence on child development in South Africa serves as the source of the book Mandela's Children, published in 2001. He is the principal investigator of a W. K. Kellogg Foundation Project examining academic success in minority children.

Barbarin joined the faculty of the Tulane School of Science and Engineering this fall.

Michael Ramos is a writer in the Office of Development Research and Writing.