Professor Takes a Bite of the Big Apple

For the past year, Dr. Tom Farley occupied an unusual position for a Tulane professor: senior adviser to the commissioner of the New York City Department of Health and Mental Hygiene. With a population of more than eight million people and a public hospital network with 11 facilities, the New York City health department is responsible for about twice as many people as live in the state of Louisiana. 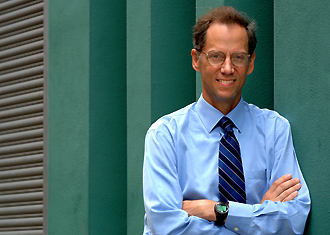 Dr. Tom Farley, professor and chair of the community health sciences department, brings back to Tulane his on-the-ground experience in a cutting-edge health department in New York. (Photo by Paula Burch-Celentano)

When he took the position, Farley knew he would be getting on-the-ground experience in a cutting-edge health department. He brings that experience back to New Orleans as professor and chair of the community health sciences department in the Tulane School of Public Health and Tropical Medicine.

“The New York City health department has long been an innovator and has been recognized as such across the nation,” recalls Farley. “The whole rest of the country looks to them for leadership. It was very exciting to be in a place where we felt like we were breaking new ground. My job was to be an all-purpose adviser. I was dealing with an incredibly broad range of issues.”

He was involved in the implementation of the health department's new regulation requiring calorie labeling in fast food restaurants, improving blood pressure management in the city's hospitals, and helping Commissioner Thomas Frieden think through a response to the rise in HIV in young gay men, among other issues.

“We talked a lot about other things we could do on food-related issues. For example, New York City sells millions of meals a day through schools, prisons and senior centers. Having healthy food guidelines for [these institutions] could have great potential not just for the people they reach but also by setting standards for other organizations.”

During his tenure in New York, Farley and Frieden coauthored an article for the International Journal of Epidemiology about the major public health initiatives of the New York City health department under Frieden. The initiative that drew perhaps the most national attention was the mandate that no restaurant in New York City could use trans-fats in food preparation. Nearly all restaurants are now in compliance with this regulation and many other cities and states have since passed or considered some version of the same law, Farley says.

Other major initiatives were a comprehensive anti-smoking program that reduced the number of smokers in New York by 300,000, large-scale free distribution of an NYC-branded condom, and mandatory reporting to the health department of certain laboratory tests for diabetics.

Farley returned to Tulane full-time for the fall 2008 semester with the observation that students and faculty at schools of public health could all benefit from working in city and state health departments.

“You just can't beat the understanding you get of what people who have the responsibility to save lives do every day,” he acknowledges, adding that the year has given him material to use in his classes.

As an extension of that realization, Farley said he is going to try to shift the focus of his research projects so that the results of his work are more useful to the people who have to set public health policies.

“I have a better sense of what sort of research I ought to be doing to give them the information they need. I think we often miss the mark on research. I want to research more policy issues that could be implementable in the real world.”