Early intervention programs to educate at-risk youth about technology could help reduce crime, says Tulane criminologist and public health researcher Peter Scharf, who is taking that message to the international arena when he speaks in December in Sweden and Norway at a summit that coincides with the Nobel Prize ceremonies. 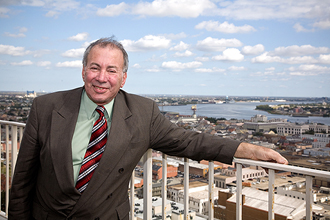 Tulane criminologist Peter Scharf will lend his expertise in criminal justice training, technology and education to an international conference in Stockholm, Sweden, and Oslo, Norway, coinciding with the Nobel Prize ceremonies. (Photo by George Long)

Scharf will discuss the role of technology in reducing crime at the Cisco Public Services Summit, to be held Dec. 8 to 10 in Stockholm, Sweden, and Dec. 11 in Oslo, Norway. The international conference is co-hosted annually by the city of Stockholm.

The nonprofit Integrated Justice Information Systems Institute (IJIS) is co-sponsoring the summit's session in Stockholm on information sharing in law enforcement and justice that will feature Scharf. He is an author and nationally recognized leader in criminal justice training, technology and education, who is a faculty member in the Tulane University School of Public Health and Tropical Medicine.

The social dimension of this approach would teach at-risk youth the norms of the modern business environment, including the respectful exchange of ideas, teamwork and problem-solving. At the same time, technological training would teach them how to acquire information through the Internet, model problems using a spreadsheet, organize information in a database and teach themselves skills using educational software, Scharf says.

“The idea is to get these kids before they enter the penal system. Computerized criminal records, easily accessible to employers, create a kind of digital gulag that keeps a person branded for life as a criminal unfit for employment,” says Scharf, a research professor in the Department of International Health and Development. “We need to immerse at-risk youth in broad educational experiences related to the knowledge economy at an early age so they can become productive members of society and never see the inside of that virtual gulag.”

The IJIS Institute's session will assemble an international array of executives and leaders in government, law enforcement and justice to discuss the importance of information sharing, collaboration and innovative ideas to combat global crime issues such as human trafficking, drugs, identity theft and terrorism.

“We are hoping that this summit session will initiate a larger dialogue about how we can bring international information sharing to a new level to combat the many serious forms of crime that are truly beyond the capacity of any single nation to address,” said Paul Wormeli, executive director of the IJIS Institute.

Scharf has authored several books that have influenced criminal-justice education and practice, including the Handbook of Forensic and Criminal Justice Technologies (2005), Assessing Law Enforcement Ethics (1996), Understanding the Computer-Age (1988), A Guide to Computer-Age Parenting (1984), Badge and the Bullet (1983) and Towards a Just Correctional System (1980). He is the founding director of the Center for Society, Law and Justice at the University of New Orleans, where he was an adjunct professor in the Department of Sociology.