Prostate Cancer May Differ Among Races

Tulane researchers have discovered genetic factors that may account for the high incidence and mortality of prostate cancer in African American men. 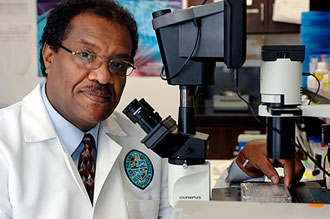 Asim B. Abdel-Mageed, associate professor and director of the molecular oncology research program in the School of Medicine, is studying biological signs that may provide clues about prostate cancer in African American men. (Photo by Paula Burch-Celentano)

Prostate cancer cells in African American men over-produce two proteins involved in the relationship between hormones and the progression of the disease, the researchers have found.

These proteins point to genes, environment or their interactions as the basis for the high incidence and mortality of prostate cancer among African Americans.

“We are breaking new ground discovering pathways that are related exclusively to prostate cancer in African American men,” says Asim B. Abdel-Mageed, associate professor and director of the molecular oncology research program in the Department of Urology at the School of Medicine.

“These findings show that the biology of the disease may differ with race.”

The study, funded by the American Cancer Society and the P-20 National Cancer Institute, began in 2003. Researchers took tissue samples of prostate tumors from 50 Caucasian men and 50 African American men during surgery. The samples were flash-frozen to preserve their genetic materials, and were immediately processed to procure normal and cancer cells from each individual by laser capture technique.

The researchers then employed cutting-edge techniques, including suppression subtractive hybridization and custom DNA microarray, to determine what genes were differentially expressed in the tumor cells from each group, Abdel-Mageed says.

“Our study was focused on patients between 50 and 60 years of age, and their tumors were all at the moderate stage,” he adds. “We tried to match all these factors between the two groups so that we could make a fair comparison. We were able to identify specific sets of genes that highly express in African American men in comparison to Caucasian men.”

The researchers found that increased production of two key proteins related to disease progression occurs in the tumors of African Americans but not in Caucasians.

“Based on this data, we believe that their selective expression may represent a novel mechanism for disease progression and development of late-stage prostate cancer in African Americans,” says Abdel-Mageed.

The Tulane team is now expanding its study into a larger cohort of patients using additional tissue samples provided by the National Cancer Institute. The researchers hope their work will lead to a clinical screening method that will result in earlier detection of prostate cancer in African American men, increasing chances for survival.

“I want to affirm that this is just the beginning,” says Adel-Mageed. “This has the potential to have clinical utility in the future. We are working on that and hoping to come to that conclusion.”