With the economy showing signs of continued decline and proposals on how to respond dividing along largely partisan lines, Michael Bernstein joined other prominent economists in signing a letter urging Congress to take immediate action to pass the American Recovery and Reinvestment Act. 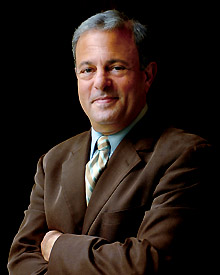 “This is not a downturn that is going to be solved with business as usual,” says Tulane provost and economic historian Michael Bernstein. (Photo by Paula Burch-Celentano)

Bernstein, Tulane's provost and an economic historian, says he signed the letter for multiple reasons but primarily because he fears the consequences of inaction. The legislation is intended to stimulate the economy by directing $825 billion toward domestic spending and tax cuts.

“There is no question that we are in the midst of an economic collapse that is bidding fair at the moment to be one of the most serious downturns in at least two generations,” Bernstein says. “This is not a downturn that is going to be solved with business as usual.”

Bernstein says there is a very real chance that the economic slump will develop into an extended period of inadequate growth and high unemployment  but economic calamity can be averted if the federal government takes proper steps.

“I certainly believe that the power of the Treasury to stoke growth and employment is a profound power if it's done well,” says Bernstein. “That's clearly what President Obama has put down on the table for Congress to consider  a major spending bill that will get a lot of money out into the economy relatively quickly to stimulate spending.”

Bernstein argues that the U.S. monetary policy conducted by the Federal Reserve has been rendered “essentially impotent” and that it is time for the Department of the Treasury to step in.

“I think it can be documented that public spending can create multiplied impacts that individualized spending can't,” Bernstein says. “If you make cogent decisions  invest in bridges and tunnels, IT infrastructure, science and technological research, invest in collegiate educations  you can get a lot more out of the spending.”

While tactical economic considerations were his primary reasons for speaking out, Bernstein says he was motivated by principle, as well. The letter was a response to one sponsored by a Libertarian organization, the Cato Institute, which has argued against governmental spending as an effective way to jump-start the economy.

“I do not accept the argument that government is the problem. I never have; I doubt I ever will. That's why I thought it was important we put a counter-message out there,” Bernstein says.

He disagrees with opponents of the legislation who say it is loaded down with pork-barrel spending or waste.

“If $30 million leaks out in pork-barrel spending, that may be the cost of doing business. But to sacrifice $942 billion for $30 million in waste is being penny-wise and pound-foolish,” Bernstein says. “You don't stand around and do nothing because we run the risk of some waste.”

He also dismisses the idea that the plan will impose an undue burden on future generations.

“If you spend the money well, it will be less of a burden for them to pay off,” says Bernstein. “If we take the GDP [gross domestic product] from $14.6 trillion to $21.8 trillion, our children will be the beneficiaries of that. The whole idea is to pay the debt down through a wealthier outcome.”

Bernstein adds that it all boils down to what we as a society believe to be significant.

“Do we think what's going on right now is important enough to justify running a larger debt for the sake of the future? Do you consider education, health care and vaccines for the young as important objectives?”