When he talks about the newest findings on the state of public schools in New Orleans, Michael Schwam-Baird is cautious. Yes, the news is encouraging  students' academic performance is improving  but “we're still nowhere near where we need to be.” 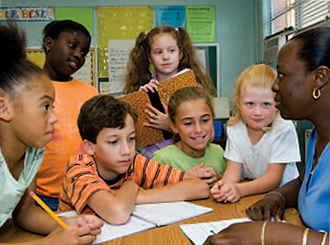 Public schools in New Orleans have made significant strides in student achievement since Hurricane Katrina, but much work is still ahead, research shows. (Photo provided by the Cowen Institute)

“Across all types of schools, both charter and traditional schools, New Orleans public schools are improving in terms of student achievement,” he says. “It's very promising that schools have made significant improvement but we're still nowhere near where we need to be.”

The institute's research shows that if the city's schools were still in one system, the district's performance would have increased by 10 points, a significant amount, since the 2004-2005 school year prior to Hurricane Katrina. However, the district would still rank 65th out of 68 school systems in Louisiana. The ranking of No. 65 is extremely low and, as Schwam-Baird points out, “Louisiana is a low-performing state.”

Using school performance data such as standardized tests from the state of Louisiana and census information, the researchers looked at trends over the first two full years, post-Katrina, and the pre-Katrina year. They also analyzed the makeup of students in the schools in terms of income and other information.

“We're trying to chronicle the transformation of schools, post-Katrina, to document how they're changing,” Schwam-Baird says. “It's very encouraging, but it's unclear with only two years of good information what that will mean in the long run.”

Institute researchers want to know if the uptick in student performance can be sustained during the next three to five years  a result that will take “committed leadership, political will and the whole citizenry keeping an eye and holding officials accountable for school improvement,” adds Schwam-Baird.

While the findings show the beginnings of positive change in public schools in New Orleans, it still remains unclear which reforms are doing the most to drive increased school performance.

The Cowen Institute has partnered with the RAND Corp., an internationally recognized research institution, on a study to assess the post-Katrina transformation of public schools in New Orleans and to identify those school practices and policies that are the most successful at raising student achievement. The report is scheduled to be completed in Spring 2010.