In Pursuit of Russian Architecture

With a photographer’s keen eye and a scholar’s sharp insight, William Brumfield has pursued churches — and other buildings — in Russia for three decades. 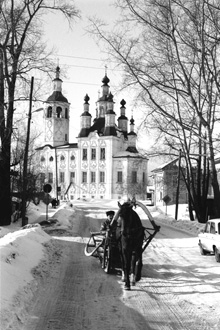 In the town of Totma, a horse-drawn sleigh driven by a Russian man pulls away from the Church of the Entry Into Jerusalem. The church in the Vologodskaia oblast was built during 1774–94. (Copyright: William Brumfield, 1998.)

Discovering Russia is a series of books of Brumfield's artistic photographs and scholarly text. In the books, Brumfield precisely documents the built landscape in northern Russian and Siberia. He says, "The books give you a sense of the unwritten drama of Russian art during the 20th century, what survived and what didn't and why."

Lately, Brumfield has focused on towns and cities near the Sukhona River in northwestern Russia. The river was an important trading route during the 17th and 18th centuries, and churches in the area were built with funds from wealthy merchants.

During the Soviet era, when religion was suppressed, the churches were vandalized, fell into disrepair or were converted to other uses — including even a vodka factory. Now some of the churches have been returned to "believers," says Brumfield.

Brumfield has shot thousands of photographs in Russia, sometimes in brutally cold conditions and often in his "beloved" black-and-white film. The photographs are Brumfield's life's work. "That's what I do," he says.

"What's left, we need to see it. I don't think we'll know the answers to a lot of this. We still don't know enough about why they [the churches] were created."

Published by a Moscow firm, Tri Kvadrata, the series so far includes five volumes — Totma, Tobolsk, Irkutsk, Solikamsk and Cherdyn. The books are available at the Tulane bookstore.

The Kennan Institute of the Woodrow Wilson International Center for Scholars also supports the series. The sixth volume is coming out soon. Brumfield says he could do 30 or even 50 more volumes. "It's just a matter of time."

Brumfield's photographs of Russian architecture are in museums, including in the William C. Brumfield Collection at the National Gallery of Art, and online at the Library of Congress "Meeting of Frontiers" website.

While museums and the Internet are valuable repositories of his work, they are nothing like a printed book. "A book always creates its own aura," Brumfield says. In his books, he presents the mysterious, stark atmosphere of the Russian landscape, where architecture has a story to tell.