Putting Tumors in the Deep Freeze 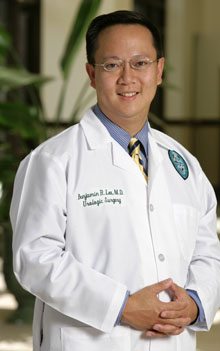 The body absorbs the tumor over time. The surgery, which is designed for tumors less than four centimeters, keeps 80 percent to 90 percent of the kidney intact, says Lee, professor of urology, and a specialist in robotics, endourology and laparoscopic surgery at the Tulane School of Medicine.

Lee's focus has been on treatment of kidney cancer with many different options: laparoscopic removal of the entire kidney; robotic partial nephrectomy, where the tumor is cut out and the remaining portion of the kidney is saved; and single-port cryosurgery.

Kidney cancer is the seventh most common cancer in the United States with an estimated 35,000 new cases diagnosed each year. Traditional kidney cancer surgery was performed via an open, foot-long incision.

Laparoscopy involves three small incisions. Now single-port surgery involves just one incision, Lee says. Lee and the Tulane urologic team presented the technique and other research to doctors in Munich, Germany, earlier this month at the World Congress of Endourology. There, he and Dr. Raju Thomas, professor and chair of urology, also presented a winning bid for Tulane and New Orleans to host this international conference in 2013. The event draws more than 1,500 urologists from across the world and will feature live surgery demonstrations, plenary session lectures, moderated poster presentations and educational seminars.

"International leaders from around the world, Hong Kong, Paris, Taiwan, Turkey, Amsterdam and more are all coming," Lee says. "I think this is a great opportunity for Tulane and the city of New Orleans."