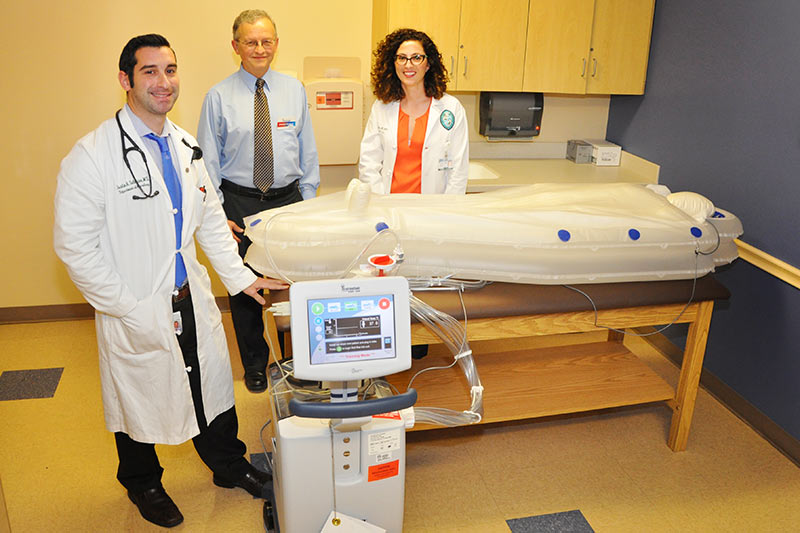 Tulane researchers are investigating therapeutic hypothermia—a method of cooling the body that often works for cardiac arrest patients—as a treatment for stroke. Dr. Justin Salerian, the new director of the Tulane Comprehensive Stroke Center, and his team are currently testing the Life Recovery System ThermoSuit in phase II trials.

“We’re the first center in the world testing this device on stroke patients,” said Salerian, who is working with Dr. Aimee Aysenne and ThermoSuit co-inventors Robert Schock and Dr. Robert Freedman in the trials.

“This device is the first to use thin liquid convection to cool skin directly.”


While previous stroke-treatment methods focus on opening brain vessels using both chemical and catheter-directed clot removal, ThermoSuit uses mild hypothermia to slow down the metabolic and inflammatory processes that occur during and after injury.

“During a stroke, the brain can’t get the supply of blood and nutrients needed to survive for a certain amount of time, so if we can reduce the demand by slowing its metabolism down, we can buy time,” said Salerian.

ThermoSuit lowers the brain’s metabolic speed by cooling the body down to 32 to 34 degrees C (about 89.6 to 93.2 degrees F), prolonging the treatment window and thereby attempting to save endangered brain tissue. Therapeutic hypothermia has been used to care for patients in cardiac arrest for half a century.

“This device is the first to use thin liquid convection to cool skin directly and inactivate the body’s main thermo regulator,” Salerian continued. This method, which he likens to falling in an icy river, is capable of cooling cardiac arrest patients down 5 to 10 times faster than previous cooling devices.

Once a patient is placed inside the apparatus, which looks like a sleeping bag and lies flat on a hospital bed, the patient is moderately sedated, a temperature probe is inserted into the nasopharynx, and the suit is inflated around them. Cold water is continuously circulated and replenished through the suit via an automated tank at about 14 liters per minute.

The patient stays inside ThermoSuit around half an hour; its cooling effects can last up to 24 hours after the patient has been treated.

Like this story? Keep reading: Stroke: The minutes that matter most

Tulane and Sodexo partner to ‘feed our future’
Homemade meals are key to eating fresh foods
Pest control
Who will pay to save Louisiana’s coast?
Sports medicine clinic treats the 'person under the helmet'