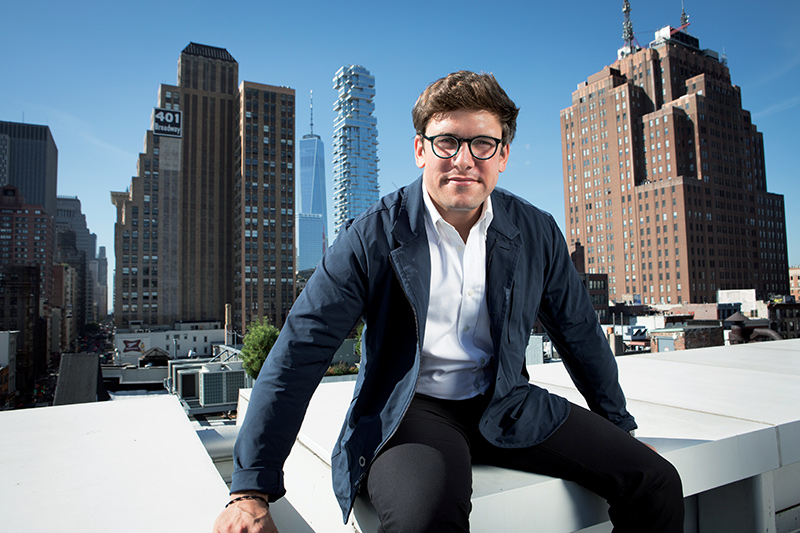 Louis Baugier, a 2013 A.B. Freeman School of Business graduate, developed Surecave, an app that allows a landlord or property owner to manage everything from finding tenants to managing multiple properties. (Photo by David Neff)

Louis Baugier had a 360-degree view of the dizzying, fast-paced business of New York real estate. By day, the 2013 A.B. Freeman School of Business graduate was part of J.P. Morgan’s global real estate group, where he worked on big Manhattan development projects. Outside of work, he was a renter who dreaded the process of finding a new place to live.

Somewhere between the two halves of Baugier’s life as a New Yorker, the industry’s inefficiencies came together for him. Out of his experiences an app was born—Surecave, which under one platform allows a landlord or property owner to manage everything from finding tenants to managing multiple properties.

“For a [New York City] landlord today, he or she is paying several services to manage one building. We’re bringing all those things together.”

Although the current version targets landlords, tenants will benefit too. “From a renter’s perspective, these are issues that I lived every time I moved in New York City. Even today, I send my paper check to pay rent.”

Surecave officially launched in late 2017, after operating in “beta” model with big-name partners such as TransUnion and Remax. The company includes another Freeman graduate, former private equity professional Stephen Denis, and also attracted the attention of early investor and fellow alumnus Josh Schuster.

“As a New York City developer who is constantly looking for new ways to streamline and simplify the asset management process, I was immediately interested in investing in Surecave after becoming familiar with the platform and being thoroughly impressed with Louis’ vision and goals,” said Schuster, managing principal of Silverback Development. “It’s an extremely valuable tool.”

Baugier said he wanted Surecave to capture the entire lifecycle of the rental process.

“When you’re running a startup, regardless of the end goal, you need to fall in love with the problem and be intimately familiar with the different ins and outs that drive that pain-point,” he said. “We’re committed to streamlining this problem for the entire Industry.”