“It's chaotic but it's very controlled chaos,” said Mary Frances “Tudie” Gleason on Friday as eight days remained in the Commencement 2009 countdown. From her perspective in the Tulane registrar's office, Gleason was feeling boxed in, but that's a good thing. 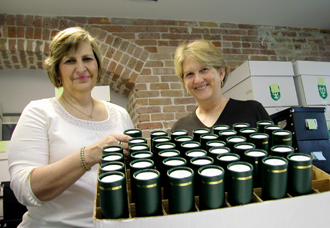 The registrar's first-floor offices in Gibson Hall are filled with boxes of diplomas and various paraphernalia crucial to Saturday's (May 16) commencement ceremonies.

“There are boxes everywhere,” she reported in machine-gun bursts. “Diplomas, tubes, cases. Boxes in the mailroom. Boxes in offices. Piled so high you really can't see people's heads.

“But we know where everything is because it's all labeled. It's orchestrated. Has to be, because we're the registrar's office.”

Meantime, phones keep ringing. Callers have commencement questions, such as edgy students who want to be sure they're graduating as expected.

The assistant vice president of enrollment management who celebrated her 20th year at Tulane last year, Gleason paused a moment to talk about the preparations behind the scenes that will make everything move smoothly at university commencement and the diploma ceremonies being held on Saturday by the nine Tulane schools.

She will be directing the work of 27 people from undergraduate admission and the registrar's office who will be escorting platform parties and faculty members, handing out name cards to all graduates and being sure that all the precious diplomas are ready and where they need to be for each ceremony.

There's a new wrinkle this year, a bit of fun amid the stress of being sure that everything runs perfectly: headlamps.

She and her staff have struggled in the past, trying to read name cards and diplomas in the darkened Louisiana Superdome, where the stage is lit but the immediate surroundings are not. Hence the new “miner's lights” that will be worn on a band around the forehead.

With the big event approaching, Gleason is confident in her staff  “â¦ a lot of really good and outstanding workers, an impressive group.” While they're all in good spirits, she said, they're “very stressed. It's a very, very, very busy time.”

And busy is what the Tulane campuses will be this week. Events begin on the uptown campus on Thursday (May 14), when graduates will be honored at a crawfish boil at the Reily Tennis Courts, followed by a myriad of events on Friday (May 15), from the Graduate Programs Recognition and Hooding Ceremony, to the Newcomb Under the Oaks Ceremony that honors female graduates and members of the class of 1959, to awards ceremonies, open houses and receptions. On the downtown health sciences campus, Friday is the annual School of Medicine Ivy Day awards ceremony.

Celebrating really gets under way at 6 p.m. on Friday when the Wave Goodbye party honors graduates and their families with a huge New Orleans-style festival on the Gibson Quad.

“All the registrar's staff is excited and happy for the new graduates and their families,” Gleason said.