The Reily Student Recreation Center turns 20 years old this year. That milestone will be commemorated with a yearlong celebration that starts today (Jan. 14) from 5 to 7 p.m. in the Reily Atrium with music by the Javier Olondo Jazz Combo. 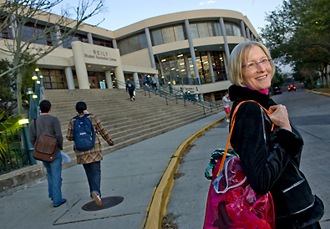 Elizabeth Poe, a Tulane professor of French and Italian, has been a member of the Reily Center since it opened in 1989. (Photos by Paula Burch-Celentano)

Students, alumni, staff, faculty and community members have two decades of fond memories at the Reily Center, ranging from the successful achievement of weight-loss goals to fun at sports-themed children's birthday parties. The center averages 1,400 visits daily by patrons, and has a core of longtime, dedicated members such as Elizabeth Poe, a Tulane professor of French and Italian.

For regulars such as Poe, a member since the facility opened its doors, the Reily Center has served not only as a place to swim and exercise, but also as a setting for rehabilitation following surgery and a refuge following Hurricane Katrina.

“I lived in a trailer for 18 months after Katrina, and the showers in those things are tiny,” says Poe. “The Reily Center became my second home and a place to shower during that time.”

As a longtime member and daily swimmer in the indoor pool, Poe says that not even major back surgery in 1994 could keep her away from the water.

“Ten days after my surgery I was back in the pool,” says Poe. “It's just something about seeing the other swimmers in the locker room at 7 a.m. that makes you feel like they are all your friends. The pool is definitely part of my social life.”

Poe says she is excited about the nearly complete renovations to the pool, which has been closed for the past few weeks for repair. The center's weight room also underwent extensive renovations last month. That construction is now complete.

Memories like Poe's are proof to Missie McGuire, assistant vice president of campus recreation and student centers, that the Reily Center is meeting its goal of being a good neighbor to the community. McGuire says that the center has been the host venue for a variety of community events including the Louisiana Special Olympic Games, the Greater New Orleans Senior Olympic Tournaments and the NCAA Youth Education in Sports Programs.

“Enriching the educational lives of New Orleanians and contributing to the health of our community has always been a strategic priority for the institution and an overarching goal of the Reily Student Recreation Center,” says McGuire. “The staff is enthusiastically engaged in our programming and is excited about all of the upcoming events.” 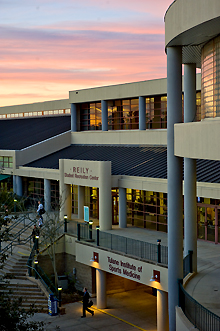 Now 20 years old, the Reily Student Recreation Center continues to be a center for exercise and fitness for faculty, staff, students, alumni and community members.

Constructed in 1989, the Reily Center is a 156,000-square-foot recreation facility that includes exercise rooms for spinning and aerobics classes, basketball and racquetball courts, weightlifting and fitness equipment, an Olympic-size indoor swimming pool and an outdoor pool and sun deck. Adjacent to the main building are outdoor tennis courts and a synthetic turf field for soccer and touch football.

The center employs approximately 200 part-time student workers, making it the largest student employer on campus. The facility is managed and led by Campus Recreation staff members in the Division of Student Affairs.

Other events currently scheduled for the Reily Center's 20th anniversary include:

Jan. 24â“30. Sweatin' to the '80s. Group exercise classes will incorporate 1980s' music and decorations. Prizes will be given to the best 1980s-style dress.

Feb. 16. Mardi Gras Mile. Runners will take a one-mile route through campus. Following the run, a festive gathering with free food and drinks will take place on Brown Quad. Registration begins at 4 p.m. and the race begins at 5:30 p.m. Participants receive a commemorative, long-sleeved T-shirt.

In the fall, during homecoming 2009, more events will celebrate the Reily Center anniversary, including the annual McAlister Mile run, culminating in a tailgate party at the homecoming football game.