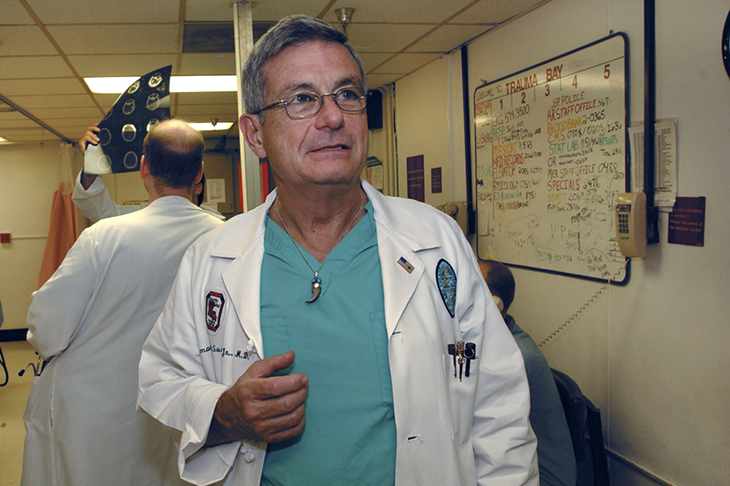 In his 38-year career at the Tulane University School of Medicine, Dr. Norman McSwain gained international acclaim for developing emergency medical procedures used in hospitals and the military. (Photo by Rick Olivier)

Internationally renowned trauma surgeon Dr. Norman McSwain, who helped transform the way doctors and first responders treat the most severely injured, leaves an “unparalleled” legacy at Tulane and beyond, according to friends and co-workers.

McSwain, 78, died Tuesday (July 28) at his French Quarter home after a brief hospitalization for a cerebral bleed earlier this month. Funeral arrangements are: visitation from 3 until 7 p.m. on Saturday, Aug. 15, and from 10 a.m. until 2 p.m. on Sunday (Aug. 16), followed by a tribute service, all at Lake Lawn Metairie Funeral Home, 5100 Pontchartrain Blvd.

&#x201c;His commitment to improving the care of the injured patient saved countless lives and improved the quality of life of untold millions of people.&#39;&mdash;Dr. Lee Hamm, dean, School of Medicine


“Dr. McSwain was a beloved, committed and devoted surgeon who has left an unparalleled legacy, not only in New Orleans, but also around the world,” said Dr. Lee Hamm, dean of Tulane University School of Medicine. “His commitment to improving the care of the injured patient saved countless lives and improved the quality of life of untold millions of people.”

McSwain joined the Tulane University faculty in 1977, but it was his dedication and commitment as a practicing trauma surgeon that gained him national accolades. He served as trauma director and a member of the teaching staff of Charity Hospital of New Orleans, surgeon for the New Orleans Police Department since 1979, and medical director of New Orleans" Emergency Medical Services Division. Shortly after his arrival in New Orleans in 1978, the city tapped McSwain to develop an EMS system here.

McSwain viewed improving trauma surgical care as a global public health initiative, working with healthcare organizations and governments around the world to develop and improve systems for effectively caring for injured patients. In New Orleans, he worked tirelessly to ensure that the missions of clinical care education and research were at the highest levels and consistently applied and delivered to all people regardless of their personal circumstances, said Dr. Douglas Slakey, who holds the Robert and Viola Lobrano chair of surgery at Tulane.

“He was of a generation who largely put their self interest secondary to the mission of being a physician,” Slakey said. “He felt that the privilege of being a physician and caring for patients was of the highest calling and far more important than personal gain. He was the sort of person who would tell people that if you do what you love, success  however you measure it  will follow.”

McSwain"s commitment to the Charity trauma system transcended local politics, as he viewed service to the community as his highest responsibility.

“His focus was clearly on providing the highest quality of care and passing on his experience and knowledge in the form of education and training to not only physicians and medical students but also every level of health care provider,” Slakey said. “He truly thought that the team was more important than the individual.”

Honored in 2009 with the Senior Vice President"s Teaching Scholar Award, McSwain was known for sharing his 18 "Rules of Patient Care" with medical students and colleagues. The document is signed with "Tsa-La-Gi," Cherokee for "medicine man," reflecting his affinity for Native American cultures.

McSwain relocated to New Orleans because he considered Charity Hospital to be one of the nation"s most important trauma centers. But his efforts resonated worldwide: His work with the American College of Surgeons Committee on Trauma and National Association of EMTs resulted in a Pre-Hospital Trauma Life Support program that is a global standard for trauma care. That program has trained more than 500,000 people in 45 countries.

McSwain wrote numerous textbooks and articles and received many awards for his trauma work. He is the only person in the history of the American College of Surgeons to receive all five of its major trauma awards.

Dr. Peter Meade, who holds the William Henderson Chair in Surgery at Tulane, remembered McSwain as the surgeon everyone wanted to emulate. Despite his legendary status as a doctor, he was approachable and generous.

“The great ones don"t have to act great. There was a tremendous amount of love for this man  at all levels of the hospital,” Meade said. “You just don"t meet a lot of people like that. He meant a lot to us. He was Tulane.”

The family has requested that in lieu of flowers, donations can be made to the Norman E. McSwain, Jr., M.D., FACS, Endowed Trauma Fund, c/o Tulane University School of Medicine, Department of Surgery, 1430 Tulane Ave. SL-22, New Orleans, LA. 70112, and/or to CaringBridge.com.