A Pentagon report released in January is sounding the alarm about the possibility of a “sudden collapse” of the Mexican government. The U.S. Department of Defense's Joint Operating Environment report by the U.S. Joint Forces Command places Mexico at the same level of threat as Pakistan, a nation already widely recognized for its turmoil. Despite the report's authoritative authors, one Tulane faculty member considers the findings suspect. 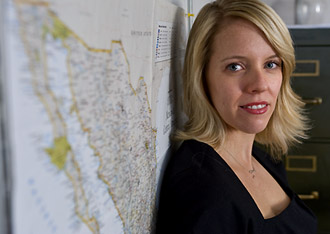 Casey Love, a professor of practice in the political science department, says Mexicoâ“U.S. relations are overdue for attention. (Photo by Paula Burch-Celentano)

“I don't think that Mexico is on the verge of collapse,” says Casey Love, a professor of practice in the political science department. Love specializes in U.S.âȁ#x201c;Mexico relations. “Mexico's democracy is relatively strong  you might even say stronger than it has ever been. The country's economy is not failing. The state is still providing basic social services, and we're not seeing deterioration of infrastructure. In sum, we are not witnessing indicators that we normally see in failed states.”

According to the Joint Operating Environment report, “any descent by Mexico into chaos would demand an American response based on the serious implications for homeland security alone.” While Love concedes the current wave of drug-related crime in the border region is cause for some concern, she doubts that there will be any military action south of the border by U.S. forces.

“As far as Mexico becoming a security crisis for the United States, I'm a little dubious,” says Love. “I don't see the American military being deployed in Mexico. Michael Chertoff stated that we might need to deploy security forces within our borders to confront spillover effects in the United States. I am skeptical as to whether or not this will happen.”

Love says that members of major drug cartels are perpetrating the violence in Mexico, but she adds that some culpability lies north of the border.

“Ironically, in this war, the primary enemy of the Mexican state is not so much the drug cartels, it's the United States itself,” says Love. “This war is being waged with weapons and money. Ninety percent of the weapons can be traced back to American vendors, and the money that pays for weaponry and bribes is coming from the American drug consumers.”

While money and resources are being sent to Mexico to help combat this epidemic of crime and violence, Love feels that that strategy has proven to be unsuccessful.

“Our approach to the drug problem has historically been a supply-side approach  militarization, drug interdiction at the border and crop eradication,” Love says. “Despite these efforts, drug violence in Mexico is escalating and U.S. courts and prisons are clogged with drug offenders. We're currently allocating about $400 million a year to train Mexican law enforcement and provide them with weapons. Clearly, that is not working.”

She says the problem is, in part, due to the Bush administration ignoring Latin America as a part of its foreign-policy strategy. She hopes the foreign policy agenda of the Obama administration will refocus on the region.

“Since 9/11, American foreign policy priorities have shifted away from Latin America toward the Middle East. Hopefully, Latin America will be removed from the back burner and replaced at the forefront of our foreign policy agenda so that we can effectively address crises such as these,” says Love.