Scientists at Tulane and North Carolina State universities have identified the chemical cues in water that entice yellow fever mosquitoes to lay their eggs. The study is the first to isolate the compounds that the finicky mosquitoes look for to breed in open-water containers. The findings are significant because they could lead to the development of targeted lures to control the insects, which also spread dengue fever in more than 100 countries across the globe. 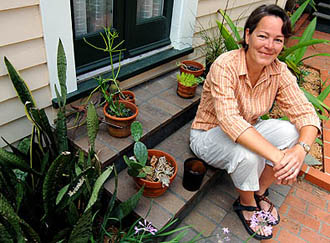 Tulane researcher Dawn Wesson is on the trail of yellow fever mosquitoes. An associate professor of tropical medicine, she is co-author of a groundbreaking study defining the chemical cues in water where the mosquitoes lay eggs. (Photo by Paula Burch-Celentano)

“No one has developed lures that target these species of mosquitoes because no one has been able to identify and isolate the compounds necessary to mass produce them into a commercially available trap,” says study co-author Dawn Wesson, associate professor of tropical medicine at Tulane University.

“It's also important to note that these lures would target egg-laying mosquitoes, which are especially dangerous because they have fed on blood at least once, and could be infected with a virus.”

In a paper in the July 8 issue of Proceedings of the National Academy of Sciences, researchers show that yellow fever mosquitoes (Aedes aegypti) look for water with just the right amount of specific fatty acids associated with bacteria from decaying leaves and other organic debris.

Yellow fever mosquitoes lay their eggs in human-made containers, usually distributing them in multiple places in residential areas. The study measured mosquitoes' responses to several containers filled with different types of bacteria and bacterial extracts to see which attracted the most egg laying.

Scientists found that the mosquitoes were attracted by a blend of fatty acids and methyl esters created from decaying leaves. Once scientists discerned specific chemical compounds that stimulated increased egg laying, they exposed mosquitoes to varied concentrations.

High levels of the chemicals discouraged the insects from laying eggs, while lower concentration were more convincing. However, the mosquitoes preferred just the right amount of the chemical blend  10 nanograms in 30 milliliters of water  to lay the most eggs.

Researchers say the right percentages of these chemicals tell the mosquitoes that the microbial content of the water is most favorable for the development of offspring.